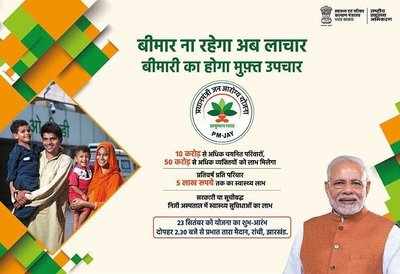 New Delhi: Under Ayushman Bharat – Pradhan Mantri Jan Arogya Yojana (AB-PMJAY), there are 1393 health benefit packages and their rates have been defined. These packages are common for Public and Private hospitals empanelled under the scheme. The hospitals are paid on the basis of the rate fixed for a particular package.

Following actions have been taken to prevent abuse under AB-PMJAY –

All admissions under AB-PMJAY require pre-authorizations from respective State Health Agencies (SHAs).
A comprehensive set of Anti-Fraud Guidelines has been issued from the time of launch of the Scheme
Regular Anti-Fraud Advisory Notes are issued to all States advising them on measures to be adopted to prevent, detect and deter fraud. 12 Advisory Notes have been issued so far to all implementing States.
All packages prone to fraud and abuse are reserved for public hospitals or need mandatory pre-authorization and require detailed documentation before claims are paid.
National Anti-Fraud Unit (NAFU) has been created for overall monitoring and implementation of anti-fraud framework. NAFU is supported by State Anti-Fraud Units (SAFU) at State level.
Guidelines for Recovery and Actions to be taken post confirmation of fraud have been issued to all States
Other Steps taken to prevent misuse under AB-PMJAY are as under:

A close watch is being maintained on utilisation data through real time dashboards to identify suspect cases for over utilization
Suspect cases and entities are flagged based on different fraud control triggers and results are shared with State agencies for further investigation
Regular joint medical audits along with SAFU of hospitals, both random and purposive, are conducted to identify any wrong doing.
Launch of Mobile Field Investigation App for prompt investigation of cases.
Automation of anti-fraud triggers in IT system for real time detection of cases
Capacity building at the state levels so that they could also undertake similar analysis.
The Minister of State (Health and Family Welfare), Sh Ashwini Kumar Choubey stated this in a written reply in the Lok Sabha here today.

Odisha registered 24.46 per cent growth in SGST collection during the...

Woman from Odisha dies of COVID-19 in New Jersey, USA