New Delhi : In pursuence of the vision of the Prime Minister,  Narendra Modi that Union Territories should become models of good governance and development for the rest of the country, a Conference on Union Territories was organized by the Ministry of Home Affairs in New Delhi under the chairmanship of Home & Cooperation Minister, Shri Amit Shah, in New Delhi today. The Conference has been inspired by the Panch Pranas of Amrit Kaal.

In his address, the Union Home and Cooperation Minister emphasized on making Union Territories a role model for the country and said that if the potential of Union Territories is fully harnessed, India will be able to achieve the goal of becoming the third largest economy in the world. Shri Amit Shah also directed the Union Territories to prepare their vision for 2047. He said that Union Territories should take inspiration from the Prime Minister, Shri Narendra Modi’s motto of “vocal for local” and “Ek Bharat Shreshtha Bharat” while striving to become a hub of tourism, development and welfare. The Union Home and Cooperation Minister said that all Union Territories should come together and work synergistically on a common platform to achieve the national objectives and vision and take the country forward in the journey of development. Shri Shah said that Union Territories are small in geographical size and have a relatively simple administrative set up, therefore Union Territories are ideal prototypes to experiment with pilot programmes. These experiments can be tested on a small scale in the Union Territories and then replicated in larger regions and States. He said that the focus should be on cooperatives, especially in the fisheries sector, for development and public participation. At the same time, Union Territories should focus on increasing their manufacturing sector to reduce their dependence on external resources so as to reduce the loss of revenue in the process. Shri Shah said that tourist circuits should be developed in the country to attract more tourists and reduce the cost of transportation etc.

Shri Amit Shah said that in this Amrit Kaal, all Indians should take a pledge to transform India into “Best India”. It is an overall vision year for the year 2047 when India will complete 100 years of Independence. All Union Territories have been given a roadmap for 2047 and an action plan for the next 5 years and the goals set for the next 5 years to be achieved. An annual plan should be drawn up. The implementation and progress of these action plans should also be monitored and reviewed regularly and rigorously to derive maximum benefits.

The Home Minister said that development should reach the grassroots level, the indicator of development cannot be measured only by the rising figures of GDP, but it can be measured only by the positive impact it has on the remotest and most deprived people of the society. He said that Prime Minister, Shri Narendra Modi has kept the Panch Pranas of Amrit Kaal and every Union Territory Administration should imbibe the spirit of these Panch Pranas in the performance of their duties. The Union Territories should be guided by these five principles: creation of safe and secure Union Territories; achieving saturation in flagship schemes; Minimum Government, Maximum Governance; zero tolerance towards corruption; and develop best practices for the overall development of the Union Territories.

The Union Home Minister said that primary education is an important medium to ensure that the future generations of the country imbibe these five principles. He said that the inspirational life of Sri Aurobindo has many lessons and meanings for administration. The Union Territories, especially Puducherry, should take the lead in documenting the lessons of his life and spreading awareness about them. 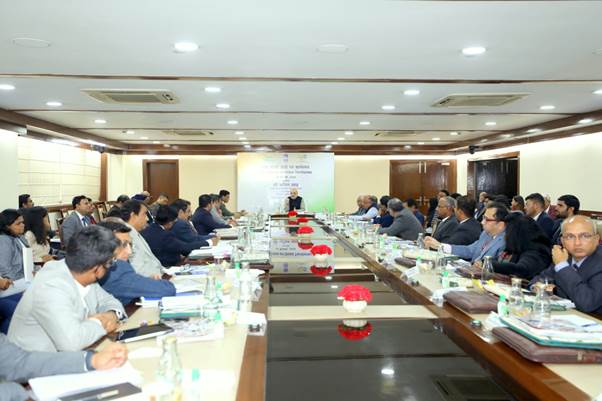 The conference provided an opportunity for cross learning and knowledge sharing between Union Territories and other stakeholders, as well as a platform for Union Territories to voice their aspirations, achievements, local priorities and unique challenges. As a preparation for the conference, a brainstorming session was held in Puducherry in November this year in which officials from the Ministry of Home Affairs as well as officials from 8 Union Territories met for two days. The three working areas – economic development, tourism and flagship plans and best practices were discussed in detail and shaped the agenda of the conference.

The conference began with a welcome address by the Union Home Secretary and presentations on each of the three verticals followed by introduction of the topics of discussion. Each presentation was followed by in-depth discussions and key findings were outlined. The three sectors discussed the strengths and challenges, uniqueness and potential of each of the Union Territories and how to fully tap them to become engines of growth. The aspirations of the Union Territories for the next 5 years were also highlighted and ways to achieve these aspirations and goals were put forward. In his address, the Cabinet Secretary congratulated and wished all the participants well for conducting an insightful session on Union Territories. The conference ended with the guidance and way forward given by the Union Home and Cooperation Minister, Shri Amit Shah.