Signing of MoU between Ministry of Panchayati Raj and Central TB Division, Ministry of Health & Family Welfare for TB Elimination

New Delhi : A Memorandum of Understanding (MoU) was signed between Ministry of Panchayati Raj (MoPR) and Central TB Division, Ministry of Health & Family Welfare (MoH&FW) here today. The MoU was signed by Shri (Dr.) Bijaya Kumar Behera, Economic Adviser on behalf of the Ministry of Panchayati Raj while Shri (Dr.) P. Ashok Babu, Joint Secretary (NTEP) signed on behalf of the Ministry of Health & Family Welfare in the presence of officials of MoPR and MoH&FW. The MoU will forge inter–Ministerial collaboration and strategic partnerships with the aim to achieving the Prime Minister’s ambitious target of Eliminating TB in India by 2025.

Shri (Dr.) P. Ashok Babu said that the MoU is expected to pave way for coordinated efforts at grassroots level to create mass awareness in rural areas to end stigma and discrimination associated with Tuberculosis and will help utilize the huge potential of nationwide network of Panchayati Raj Institutions (PRIs) / Rural Local Bodies for elimination of TB in India by 2025. This MoU will serve as a milestone to achieve the objective and target of TB Free India Campaign. Speaking on this occasion, Shri (Dr.) Bijaya Kumar Behera said that the Ministry of Panchayati Raj has joined hands with the Ministry of Health and Family Welfare to take forward the “TB Harega, Desh Jeetega” campaign in rural India that targets to achieve the health-specific Sustainable Development Goal (SDG) target related to TB by 2025, five years ahead of the global target of 2030. He assured to take up this cause to the nook and corner of rural India through the PRIs for their active involvement including due weightage in the Panchayat Development Plans towards elimination of TB.

Dr. Behera expressed hope that this Inter-Ministerial cooperation and collaboration between MoPR and MoHF&W would focus on creating awareness at grassroots level through active involvement of Panchayats / Village Health, Sanitation and Nutrition Committee (VHSNC), and would also support a range of possible collaborative activities towards the eventual eradication of TB from India by the year 2025. 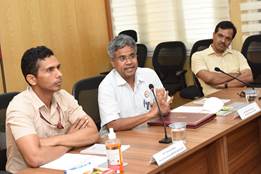 The TB Free India Campaign has been launched by the Prime Minister Shri Narendra Modi to eliminate Tuberculosis in India by 2025, five years ahead of the targets set by the UN’s SDGs. It’s a commitment that signals Prime Minister’s firm resolve to fighting the disease in India which has the highest burden of TB in the world.

The main objective of this MoU is to forego convergence at policy, programme and implementation levels across the Ministries of the Government of India for a multi–sectoral and accelerated response towards TB Free India. MoH&FW has developed a National Strategic Plan (2017–2025) for elimination of TB in the country by 2025. Through Inter-Ministerial coordination MoH&FW aims to reach the population served by various Ministries such as workers, miners, migrants, Tribal Populations, Women and Children etc.