Shri Rupala said that ring vaccination should be done first in the districts where there are animals suffering from Lumpy Skin disease so that the spread of this disease can be stopped in other districts. He added that there is a need to make efforts at the ground level by isolating the animals suffering from the disease and only then can other animals be kept safe from the disease.

Union Minister was informed that, so far, 8 districts in Haryana are free from this disease as not even a single case has been registered in these districts. He directed the State Government to follow the guidelines issued by the central government to prevent further spread of the disease through bio security, regulating movement of animals and ring vaccination. 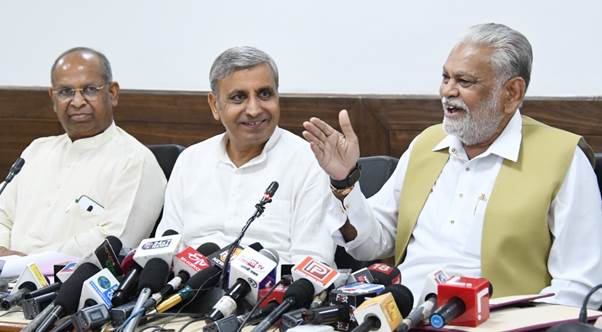 Uniformity of price of Goat Pox Vaccine across the states was discussed. Shri Rupala has assured that necessary action will be taken. Responding to the demand for sufficient supply of vaccines, Union Minister has indicated that the department has been in touch with the vaccine manufacturers to enhance the production to meet the requirements of the two states.

Union minister has emphasised on creating isolation facilities for sick animals. He emphasised on using herbal and homeopathic medicine for sick animals. Other steps to prevent the spread of this disease were discussed in detail as per the guidelines issued by the central government. The minister also reviewed the progress of other schemes of Fisheries and Animal Husbandry departments in Haryana.

Committee of Experts on Sustainable Finance submits report to IFSCA