Nari Shakti of NER : A inspiring tale of Smt. Yobina Lyngdoh Marshyllong-NERCRMS – a registered society under the aegis of NEC, Ministry of DoNER.

New Delhi : Yobina Lyngdoh Marshyllong is a resident of Jakhong Village, West Khasi Hills, Meghalaya. Coming from a very remote area,she lacked confidence in marketing her agricultural produces. Due to which, the dream of becoming a successful entrepreneur remained a dream only. Until in the year 2001, the Govt. of India intervention through North Eastern Region Community Resource Management Project (NERCORMP) came into her village. 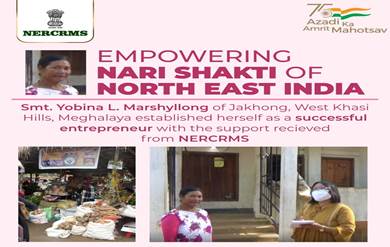 Under the project, Ms. Yobina became the member of Self Help Group (SHG) i.e. ‘KA BUIT KA LONG KA BOR’ (Knowledge is Strength). The SHG was formed on April 16, 2002. Sooner, she also became the Chairman of the group due to her leadership qualities and managerial skills.

NERCORMP had been beneficial to the entire village. In order to address the issues of open defecation, the entry point initiative launched under the project was to establish affordable toilet facilities. The initiative was well received by the villagers and accordingly they learned about cleanliness and hygiene.

Anotherinitiative supported by the project was Revolving Fund to the SHGs. Initially, the SHG received a total fund support of Rs. 1.00 (One Lakh). Smt.Yobinatook a loan of Rs. 14000/- (Fourteen Thousand) from the SHG revolving fund and established a grocery shop within the village. Through the capacity building support received under the project, she sharpened her entrepreneurial skills and further expanded the business. Gradually, she opened another grocery shop in the village itself.

After successfully opening two grocery shops in the village, she also ventured in selling her produces to the urban centers like Mairang and Shillong. This has resulted into transforming her into a successful entrepreneur.

Smt. Yobina along with the other members of the SHG sellstheir goods in Mairang and Shillong. Since the group is directly selling their produces at the urban centers, they now earn Rs.10,000/- to Rs.15,000/- per day.She also encouraged others and formed new SHGs. There are nearly 70 members.

NERCORMP made a difference in her life as well as in the life of other SHG members. It has brought improvementin their overall living standard.

Smt. Yobina Lyngdoh Marshyllong has expressed her sincere gratitude to NERCRMS, NEC, GoI for helping the villagers of Jakhong Village in realizing a new meaning of Atma Nirbharta.