In the dawn of 2020’s Durga Puja, the city of Joy welcomes festive spirit in India. Complementing to that, newly released song ‘Dugga Elo’ sung by Akriti Kakar and Debanjali B. Joshi is making rounds in the hearts. The song is composed by well known music composer and producer Ajay Singha who says that ‘Dugga Elo’ was initially an idea of celebrating the spirit and strength of feminine power. with Maa Durga’s blessings. He says, “What sets the song apart from all other releases is that it is very organic and realistic and the only video which features and celebrates women empowerment. It is grounded and earthy with positive vibes.
This song has many beautiful moments in making and I am really grateful to a lot of people to complete this beautiful song within a short time. I remember recording guitars with Shomu in the morning, vocals in the afternoon with Akriti and Debanjali and through video call recording Dhak and Khol in the evening at Studio vibration Kolkata with Joy Nandy.”

He extends gratitude to the lyricist Rajib Chakraborty who has beautifully penned the song.

Ajay’s compositions became popular when he came on board with ‘Bollywood Unwind’. However, ‘Kaakan’ was his first significant step in the feature film journey. He mentions, ” I have been composing for quite a while but “Kaakan” was my first significant step in my feature film journey. It got me several nominations for the symphonic style title song featuring Shankar Mahadevan and Neha Rajpal. After that, I composed for few other feature films, the latest being ” Paharganj” which has the hit track “Kyun Dil Mera” featuring Mohit Chauhan. I like to try out different genres and styles but try to keep one sound, which has a soulful natural connection. I feel really happy when I see my compositions getting appreciated like the hugely popular, folk fusion “Rongila Re Mon” from Oriplast Originals featuring Akriti and Dikshu. It has so many beautiful dance covers.” 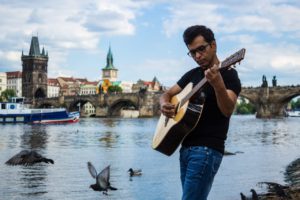 He goes on telling about ‘Bollywood Unwind’, “”Bollywood Unwind” was the first official recreation album released in 2014 which started the trend of cover songs in a big way. My friend Deepashree and Suresh had started a new company Strumm Sounds and had procured license for several popular classics intending to revisit them again in a tasteful, musical manner. They approached me and we sat down and selected the most possible ones which has potential to sound good with a completely new contemporary sound and approach. This is how the “Unwind” series started. When I first approached the arrangement of the songs I decided to make something completely new using only the song melody. Not even using the popular signatures and theme of the classics. The idea was to create a fresh song which reflects todays sound heard globally. It was a risk. But by the grace of God worked truly well. The album got played all over the world, in Cafes, Malls, Airport lounges, Radio etc. I got calls from so many places by friends congratulating me on the beautiful arrangements. Have to give a lot of credits to my musician friends Shomu, Krishna, Paras, Ashwin, Tapas, Humtu, Shyam raaj ji, Shriram who helped to shape up the songs in a unique way.”

Ajay, as a composer also states that it is very important for an artist to leave a signature in every creation. “Ultimately what matters for every Artist is to create his own unique style. The one that sets him apart. For me it took a little time, but I have evolved to a point today where I know what sound I want from songs. I am happy to see people recognizing this aspect of my music and accepting it warmly.
This sound does vary from project to project but the underlying core backbone is actually always the same. It has the same signature,” he mentions. 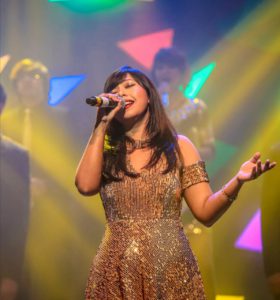 For Debanjali, ‘Dugga Elo’ unfolds an unique chapter having freshness in the sound. The song coming out during Durga Puja drives away the negativity of Covid crisis. In accordance to this, Debanjali says, “Despite of this unfortunate condition across the world, we can still keep the positivity in our lives with the hope of getting better days and this song is a perfect way of keeping the spirit of Durga Pujo alive. I would like to appreciate SVF Music for making such an amazing video for this song which totally takes us back down the memory lane and reminds us about the fun we all have during the Durga Puja days. The experience of working with Ajay Singha, Akriti, Rajib and the whole team was absolutely beautiful. I didn’t have any idea till few days back before the release of the song that I’ll be singing this song but it all happened really quick.
I’m glad to live up to the expectations of Ajay da and deliver it in the way he had envisioned. I feel he has composed it keeping the urban sound in mind yet sticking to the root of the Bengali culture.”

Music is therapeutic for Debanjali since her childhood days. Some of her remarkable works include Chhoya Chhuyi (duet with Armaan Malik), Yaara Tujhe (Single with Shaan), Kore Kore etc. She has sung the title track of the Gujrati film ‘Kachindo’ and was nominated in the GIFA AWARDS 2019.

Technology and networking have proven to be boon in past years. Debanjali mentions that internet has made a great influence on her career. “It has been visible since last 1-2 years as every label/production house/company has been putting up their works on their respective social media platforms which helps new artists like me to reach our audience faster and better. I am grateful to my audience who connected with me through such mediums and have shown their love ever since. Social media has helped a lot of people these days in terms of spreading their art and I gladly have the resources to best of usage,” says Debanjali.

She also informs about her future projects- “I’ve been singing for few projects simultaneously. Some are for films, web shows, TV serials and some are independent music projects. I will share the details as they fall in place and ready to be released. 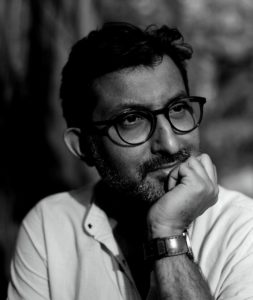 Rajib Chakraborty who has beautifully structured the song in his words, says that the main theme of the song stands out through the video which portrays the enthusiasm of Puja celebration in Bengal.

Talking about his experience, Rajib informs, “Ajay and I have worked together earlier. We both share a great bond. We have collaborated with Akriti in one of seasons of Oriplast Originals.”

“Everyone was sceptical about this year’s Durga Puja. However, SVF took the ultimate decision of roping singers and video making. There is when Akriti and Debanjali came onboard. The video suits perfectly to the situation, mood, and Puja season. Nonetheless, Durga Puja is more of an emotion for us. Maa Durga arrives at our threshold as a family member. And due to Covid outbreak and restrictions, this year’s extravagant celebration is hampered. The song not only conveys the feminine power, but also tells that despite of dark times the devotion and Nostalgia remain untouched,” he adds further.

The entire team of ‘Dugga Elo’ are elated with the overwhelming response. “It feels great how the audience connected with thought,” concludes Rajib.

Puri swargadwar Redevelopment to be completed by March 2021