One of the biggest movies of 2022, “Bramhāstra: Part One- Shiva” is witnessing a phenomenal run at the box office, as well as in the audience’s hearts. Among several factors behind a movie’s success, music plays a pivotal role. It won’t be wrong to say that music is a deciding factor in a film’s destiny.
On this note, Odisha’s Anurag Mishra has played a crucial part in the background score of “Bramhastra”.

While sharing his experience exclusively with us, he says, “It has been surreal, to be honest! And the best part of this is that it was unplanned. I got a call on one evening and then a marathon of night-outs, which happened with a great team of Pritam’s JAM8 studio. Very much grateful to the universe for throwing these opportunities in front of me.”

He mentions it as an ‘impromptu’ moment of fate. A call from a friend got him to become a part of this magnificent experience. He further explains his sessions with the team by saying, ” The two-week period was immense learning for me, as I have always been solo in my music journey, until now – releasing music solo or writing, singing, composing. But here, singing in a choir for a background score was completely alien to me, and was very exciting. Of course, the scale of “Brahmastra” being the biggest Hindi film ever made will always be a proud moment for me. But I am now exposed to a different skill that I will cherish. I always say this – it is a privilege to be paid when you are learning.”

He continues, “I am completely enthralled with the response. The BGM and VFX have been the two big talking points of the movie. And while making the vocal sections, somehow we all knew, this is going to be grand and it is not at all surprising to see the wonderful response to the score of the movie. I must congratulate Pritam da and his team for the years of effort they have put in to in making this, which is their best work yet.” 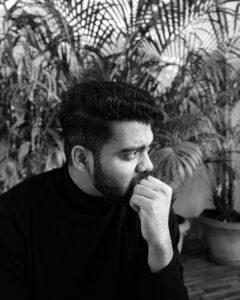 Apart from “Bramhastra”, Anurag is also associated with this year’s film- “Rocketry- The Nambi Effect”. He has penned the lyrics of ‘Aasmaan’ in the movie. Talking about it he says, “I feel blessed once again about this. From the bunch of film/web songs I have written, ‘Aasmaan’ will always be the best experience. I got a call at midnight that the team needs a song by the next morning. Then followed a night out and the next day I was speaking with R Madhavan, who is the director, and producer of the movie! We had some iterations which took another night out and yes, in 2 days, we finished writing, recording, and mixing the song and everyone loved it. Knowing the inspiring story of Nambi sir, really helped me write the song and I am proud to be associated with such an important film like ‘Rocketry’.”
His other works include “Annebelle Sethupathi”, “Gray, and several independent projects alongside two of his popular music albums.

Being an independent artist in the first place, Anurag believes in exploring and experimenting with music and originality. His recent album ‘Lifafe’ has been massively welcomed by listeners all across. Much before this in 2019, Anurag had released “Project SWA”, his first ever independent album that received wide acclamation and response. While “Project SWA” represented individuality and emotions associated, with “Lifafe” he goes on to explain it as his ‘turning point’ in life. “I have always wanted to set high standards for myself, not just in music, but in life, and “Lifafe” was just an extension. I have sung, composed, and written all the songs for this album and me and my team ( I would like to mention my director, Bijoya Mukherji, who has been instrumental in conceptualizing and directing all music videos) executed the music videos for every song of “Lifafe”. I rarely see anyone releasing music albums, forget about making music videos for every song.”

Songs are storytellers, he says, “I feel, songs have to tell a story or it has to be a beautiful expression. If they are doing none of these, then I am afraid, it is not art. I knew after the “Project SWA” album in 2019, I had up the ante, and “Lifafe”, according to me is an upgrade in terms of everything – sound, my role, presentation, and storytelling. Also, I wanted to share more solo music with people, apart from writing, singing, and composing for others. And I am proud of this effort as this is the polar opposite of quick reel-music. I want people to connect to music and remember it, even though social media algorithms say something else.”

He further informs us about his upcoming projects. “Fortunately, I am writing for two films and a web series. Can’t reveal much at this stage. I am also working with WYNK Music to release at least a couple of songs every month, starting from October, till my next big album releases. And a lot of indie projects happening on the side. I hope all my collaborators get to release that stuff soon.”