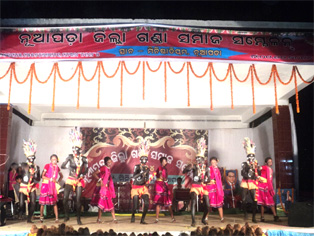 Nuapada: Nuapada Ganda Samaj, a scheduled caste body of Nuapada district organized district level convention at the Mini Stadium, Nuapada on 9th Nov 2014.
Before the formal meeting, “Kalas Yatra”–a peaceful procession (showing the symbol of unity and integrity within the Samaj) started from Shiva Mandir, Teli Nawapara and reached to the Mini Stadium, Nuapada. Around 4000 members of the Samaj across the districts from Nuapada, Khariar, Komana, Boden and Sinapali block participated in the Kalash Jatra and in the convention of the Ganda Samaj.
Ugresa Tandi, President Nuapada Ganda Samaj welcomed the guest and presided over the meeting. In the programme a number of dignitaries from different fields’ i.e political, cultural and educational etc who have earned name and fame for the Ganda Community were felicitated. Among them Jintendriya Harpal, the noted Sambalpuri Singer (who composed and sung Rangabati), Pushpanjali Pandey, the Zilla Parishad President, Nuapada District, Pradeep Kumar Nayak, former M.P. of Kalahandi district, Pradeep Kumat Nayak, PD DRDA, Nuapada are important. From neighboring State Chhatigarh, Ganguram Baghel, former MLA, Ramlal Chauhan, present MLA, Saraipali, Harish Deep from Raipur, Jubraj Baghel from Bagbahara etc were also participated and felicitated in the convention.
On the occasion, cultural programme were performed by school children. Participants of the programme enjoyed the song “Haigo Rangabati” sung by Jitendra Harpal. Hemu Niyal managed the stage.
At the end of the programme 8 point memorandum was submitted to the President of India through the District Collector, Nuapada. In the memorandum submitted, the Nuapada Ganda Samaj has demanded recognition of Individual and Community rights over forest land and forest. “When hundreds of Gangda Community people are occupying over forest land and have applied for recognition of Individual forest Rights along with tribals in the district, it is unfortunate that the district administration is selectively issuing forest rights titles to scheduled tribes only”, said Ugresan Tandi, the president of the Nuapada Ganda Samaj.
The Ganda Samaj has contended that they have been living and depending upon the forest and forest land along with the Scheduled tribes i.e Kandha, Sabar, Binhjal and Kamar in the district. Like the tribals, the Ganda do have their clan system and they also worship the natural god, goddesses, deities which the tribals do worship in the area. “This community is the integral part of society which has performed an important role in the village community as “Dakua” now as “Gram Rakhhi” in the villages and are the aboriginal inhabitants in the area and are also eligible to get forest land rights title”, Said Murali Suna, the Secretary of the Samaj.
The Ganda Sanmaj has also demanded Record of Rights (RoR) over all those Govt. (revenue) lands where the landless community people of the Ganda Samaj have been settled/have constructed houses and occupied for cultivation since years together.
Besides, in its memorandum submitted, the Ganda Samaj has urged upon the Govt.;
1. Not to discriminate between ST and SC students and to provide equal opportunities in educational facilities, hostel facilities etc;
2. To open one Degree Science College in the District Headquarters in the name of Dr. Baba Saheb Ambedkar;
3. To open State level Library;
4. To give priority to the local candidates in the Govt. jobs/vacancy and to implement the reservation system in private jobs in the area;
5. To implement the reservation system in the promotion in Govt. Services.
6. To provide pure and safe drinking water to the floursis affected area of the district, electricity and road facilities to all the SC hamlets;
7. To identify and give allowances to the Artists from different field in the area;
8. To protect the interest of the laborer class/community working in and outside the district and State, to implement the insurance policy; and
9. To improve the facilities being provided to the handicapped people in the district.
At the end of the programme, Murali Suna, Secretary of the Nuapada District Ganda Samaj gave vote of thanks to all the guests and participants of the programme. He acknowledged contribution of the all the presidents and secretary of all 5 blocks, Organizing Committee Members for successfully organizing the functions. He also gave vote of thanks to all the community participants of the programme who contributed rice and money for organizing the programme.  Among others who played an important role in organizing the convention are; Amar Singh Mahananda, Treasurer, Gajananda Chauhan, Advisor, Rewaram Chauhan, President, Nuapada Block, Bhagatram Jagat, Vice President, Nuapada, Kanhei Chauhan, Joint Treasurer, Ram Charan Tandi, Harilal Chauhan Ghanshyam Jal, Pustam Sunani, Upendra Bagh, Gariamani Bagh, Arjun Bagh, Iswar Sunani, Mukesh Pandey, Manijat Arjya, Braja Bihari ,  etc. 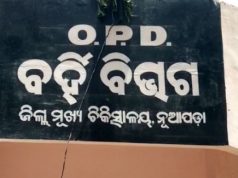 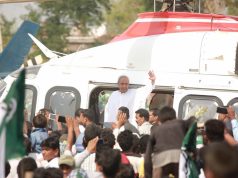 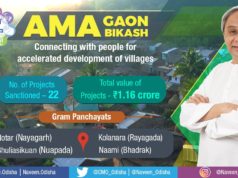