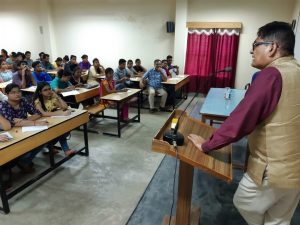 Prof. Mishra who teaches development economics and constitutional law at KIIT University, Bhubaneswar, was delivering a lecture on Randomised Control Trial and the Nobel Prize in Economics at the Indian Institute of Mass Communication, Dhenkanal on 29 October 2019.

Explaining the process of how Randomised Control Trial is conducted and how Esther Dufflo did her research on immunization in India’s Rajasthan, he said, the trio took a new approach to Development Economics.

“Duflo exercised RCT on three groups in Rajasthan’s Udaipur. The first group was given free immunization in government facilities. Yet it only accounted for only 2% attendance. The second group was an NGO that provided free immunization through camps which resulted in 16% attendance. The third group was a vaccination camp that provided one kilogram of vegetables with free immunization. It increased attendance to 86%. Clearly, the RCT shows that when free vaccination amalgamated with availability, empathy and incentive was provided to the people, it got an overwhelming response by the people,” said Mr Mishra.

He also stressed on the fact this kind of evidence-based research which does not reveal the purpose to both the investigators and the people taken as a sample to weed out possible bias should be augmented with experience. “RCT will provide us with concrete evidence on how the policies may function or they are performing. We should also gather enough data from the experience of the people to formulate the best policies,” he said.

The concerns for the welfare economists have always been to meaningfully relate growth with development. The father of development economics, Amartya Sen focused on human growth and sustainment. The sustainment included per capita GDP, life expectancy and mean years of schooling. In comparison to the USA, India stands far behind in all of these measures. SN Mishra suggested, “In order reducing poverty we should maximize our growth and the global objective to counter poverty is equality, access, and excellence. India performs well in equity and access but lacks excellence which consists of quality of education and health.”

According to him, the lessons for India would be to increase its higher social sector investment from 5% to 10% of GDP. India’s unorganized sector (94%) which consists of agriculture, small business, and smart villages need effective policy implementation. “We should abdicate 3 I’s: Ideology, Ignorance, and inertia. We should follow the right straight path instead of turning left or right,” Mr Mishra said.