“Dreams Are Worth The Effort Always”- Filmmaker Dayanidhi Dahima

‘Adman’ of Odisha Dayanidhi Dahima has made it to new heights with two of his short films ‘Sita’ and ‘Antarvasna’. The third month of 2021 has brought him on the new glorious path as both the short-films have made it in the race of Filmfare Awards. Talking about it he expressed, “As a producer, it was one memorable moment when I saw both my films in the nomination category. While ‘Antarvasna’ topped the list, ‘Sita’ was in 19th position in the row. I believe all those countless moments of hard work have paid off.”

‘Sita’ stars actress Shriya Pilgaonkar, veteran actor Lilliput, and child artist Om Kanojiya in pivotal roles. The story focuses on three major themes that challenge our societal structure. Those are- abandoning newborn infants irrespective of gender, casteism, and mythological relevance of Sita with burial practice of infants.
Similarly, ‘Antarvasna’ is focused on the unspoken or unexpressed desires of women. Actress Shivani Tanksale has played a middle-class woman who subdues her desires and fantasies in between daily chores. 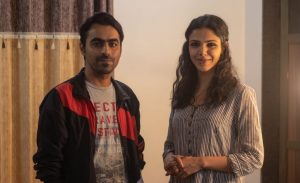 “Through these films, I wanted to express about the dark side and barriers led in our society,” says Daya. His other short film ‘Nawab’ starring Aparshakti Khurrana was also nominated for Filmfare in 2020.

When asked about his upcoming plans, he says, “I am up to make a web series that will be completely shot in Odisha. It is my major project and I believe, it will be a game-changer for the entertainment base of the state. The series will feature Odia artists alongside other actors of bollywood. However, the official announcement is yet to be done.”

Expressing his gratitude to the entire team of ‘Sita’ and ‘Antarvasna’, Daya mentions, “I am thankful for having worked with such wonderful people who pushed limits to make it all happen. Firstly, I would acknowledge the efforts of the co-founder of Daya Entertainment Pvt. Ltd. Sibasis Nayak. Durga Mohapatra sir has designed the production of ‘Antarvasna’. He has predominantly worked in big banner films like ‘Total Dhamaal’, ‘All The Best, ‘Radhe’ etc. Another artist from Odisha Devesh Ranjan has also played a brief yet crucial role in ‘Sita’. The music is given by Aditya Mohanan. Shijin Melvin Hutton has designed the sound. Abhinav has directed both films. Trishaan and Shubham have done the casting for the films. They have earlier worked in ‘Ludo’, ‘Gold’ etc. Khushboo Agarwal is our editor for the films. She had worked in ‘Aarya’ in the recent past. Also, we have co-produced the films along with Big Banner Films.”

After fulfilling the audience expectations, Daya, as he informs is gradually moving into the world of web series. He conveys a message to the aspiring artistes that if your dream asks for a bit more effort every time, it will all be worth it in the end.