Bhubaneswar: Godrej & Boyce, the flagship company of the Godrej Group announced that its business Godrej Interio, a leader in home and office furniture has launched its new outlet at Patia Chowk in Bhubaneswar. Spread across a sprawling 5500 sq. ft., the state-of-the-art redesigned and revamped store was launched by Anu Chowdhury, the celebrated actress across the Ollywood film industry and a renowned social activist along with Ms. Sulochana Das, Mayor of Bhubaneswar . This flagship store will provide an impetus to Godrej Interio’s retail presence in Odisha and Eastern India markets.

The store offers specially crafted quality products in home furniture, mattresses, and home storage – the largest selling category in India, in different styles and finishing. To bring cheer to celebrate the store opening, Godrej Interio is also offering assured gifts with every purchase as an inaugural offer on the occasion of new store launch.

Expressing her excitement on inaugurating the new Godrej Interio store in the city, well-known film actress, Anu Chowdhury said, “I’m ecstatic to launch the new store in Patia Chowk. Decorating my home is a very intimate activity because I want the furniture to reflect my personality. Godrej Interio is well-known for offering a complete range of home furniture best suited for Indian homes and meeting international standards. They are also known for their trust and responsibility towards quality furniture at a competitive cost.” 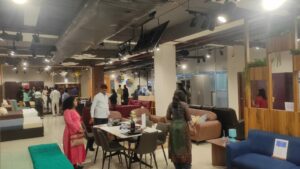 Speaking on the importance of the new store in Bhubaneswar, Manoj Rathi, Vice President, Godrej Interio, said, “Bhubaneswar is a growing economic hub of the region and remains an important market in Odisha. Owing to the excellent location of the store and Godrej Interio’s strong and growing brand recall in the region, we expect the store revenues to touch INR 5 crore per annum annually. With the opening of this new store, Godrej Interio has expanded its footprint in Eastern India, where it has a significant client base. Due to the strong brand recognition, we are certain that the brand will further expand the customer base bringing more patrons into the rapidly expanding Godrej Interio family.”

Commenting on the growth prospects, Manoj added, “We generate revenue of INR 42 CR from Odisha region & 204 CR from the eastern zone and plan to open another XX outlet in the state by the end of F.Y.23 and plan to grow by XX% in the next three years. We will be focusing on widening the market penetration in the next 2-3 years across the country thereby catering to tier 2 & tier 3 cities as well. Our plan is to expand the retail network by 100 outlets and increase the deliveries to 5,000 pin codes with an improved backend for deliveries and aim to double the platform sales run rate by end of this financial year.”

Madhya Pradesh : 83 lakh beneficiaries will get benefit from New Year