Bhubaneswar : An exploration team from the Indian National Trust for Art and Cultural Heritage   has visited the ancient cave atop a small hillock in  the Narangarh Village  near Tapang in Khurda District.

The cave, called the Pandavahara Gumpha by the locals, is a natural formation which has been widened by chiseling is very akin to the caves found in the Khandagiri and Udayagiri hills. The 20 feet by 10 feet wide  cave and has a uniform height of 4 feet. There are many rock art and inscriptions carved on the walls. Engravings in various geometrical forms and figures of human and animals are extensively depicted. Stone-age tool implements too have been reportedly found earlier in the vicinity of the cave.

The Cave was known to the villagers on the foothill of the hillock for centuries and was a spot revered by them. Till three decades ago, the cave had been occupied by some holy man, but had been abandoned after a small landslide made the place inaccessible.

The ancient cave was exposed when the Orissa Mining Corporation (OMC) started clearance work for mining of Khondalite stone   from the area.  The land belongs to the Shree Jagannath Temple and has been leased to OMC for quarrying the stone blocks,  who  have been digging up the hill for the last two years.

The INTACH team comprising of Anil Dhir, Dr. Biswajit Mohanty, Deepak Nayak and Bikram Nayak  visited the spot and trekked up the hill with the help of the locals.  The surveyed the cave and documented and recorded   the ancient rock carvings and inscriptions.  According to Anil Dhir, the animal and human figurines carved on the walls indicate that the cave may have prehistoric origins. It is very similar to other caves found in the Mahanadi Valley. 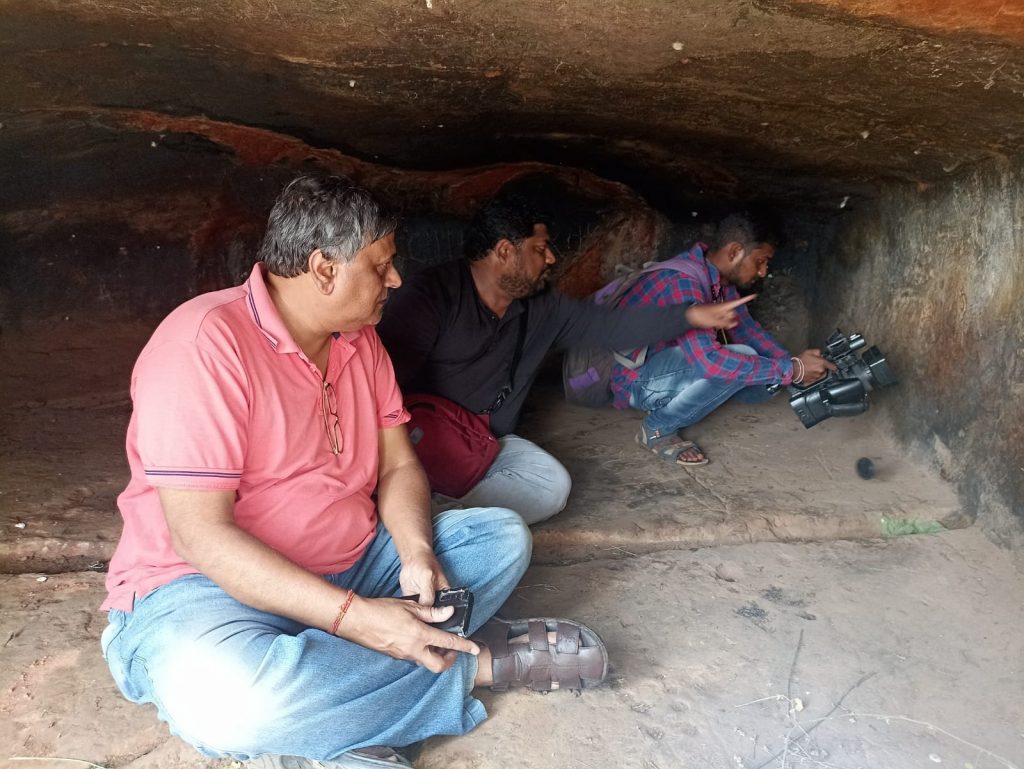 Dr. Biswajit Mohanty has opined that all quarrying activity should be immediately stopped as the excavation and cutting has reached the base of the cave and is just 7-10 metres away at the base of the hilltop. The use of heavy machinery, compressors and cutters just near the cave will spell its doom. Besides, the place is an elephant corridor and the pachyderms are frequently seen here.  The recent death of two elephants in nearby Bhusandpur is indicative of this fact.

Dr. Mohanty has earlier last year visited the Bhima Mandali Caves in Sambalpur district   and raised the issue of the sheer neglect and vandalism that was happening to the prehistoric sites.

Deepak Nayak, who has earlier discovered half a dozen such caves in the Mahanadi delta area, says that the inscriptions carved on the walls are in the Brahmi script.  The symbols have motifs of both Jainism and Buddhism.  According to him, a proper study of the inscriptions should be undertaken by epigraphists and experts. Deepak also apprehends that the nearby hillocks too may hold such ancient wonders and that a proper archaeological survey of the region should be undertaken by the ASI and the State Archaeological department.

Odisha perhaps has the highest number of prehistoric rock art and caves among all states. While most of these sites are found in the hills of Sundargarh, Jharsuguda, Sambalpur and Kalahandi, recent discoveries by Intach  teams in the lower Mahanadi Valley,  in Kandhamal district and other areas  need proper study. However, the survey team is certain of the antiquity of the Narangarh cave  inscriptions are not less than 1,500 years old.

According to Amiya Bhusan Tripathy, the State Convener of INTACH,  the  matter of the Pandavahara caves will be taken up with the state and  central authorities  for proper conservation and preservation.  He has said that INTACH is already in touch with the Culture Department for the preservation of the Rock Art in the Bhima Mandali   and a report has been submitted. Since the rock art site is about 45 minutes away from Bhubaneswar it can be turned into a major tourist attraction for heritage tourism.