On a fine Sunday morning on 26th Jan 2020, instead of waking up late, a total of seven cultural & heritage enthusiasts decided to explore the area around Raj-Ranpur in Nayagarh district. The town is also known as Ranapurgarh or simply Ranapur, just 70kms from the capital city of Bhubaneswar. The place also got its tag as the second Srikhetra after Puri temple due to the presence of the 15th century Jagannath temple built in Puri temple style. The one day tour of 12 hours by the start-up touring agency, Aitiha , covered sites like Maninaga hills, Jagannath temple, Olasingh weavers village, dargah of Bukhari Baba at Kaipadar. 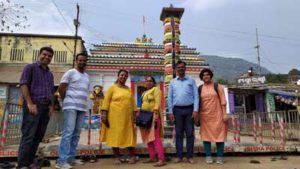 The Maninaga hills is quite picturesque and the ghat drive is just breathtaking with a chance to have a bird’s eye view of Ranapur town from the hilltop. The participants were pleased to reach the top & have darshan of Maa Khilamunda who is the aradhya debi of Ranapur. The Ranapur town is famous for the magnificent Jagannath temple. The deities of Lord Jagannath, Lord Balabhadra & Debi Subhadra are worshipped as per Puri temple’s rituals. There are several other shines inside the temple complex. The most outstanding is the Snana Mandap with beautiful motifs of lions & elephants adoring the base wall.

The rustic village of Olasingh is lesser known to the outside world, yet it has good heritage temples & zamindari houses. Above all, it’s famous for the weavers. “It’s a village where you will find very friendly people who are keen to invite you to see their works & we were really blessed to have such a nice welcome” said Sonal Bhat, one of the participants.

Baba Bukhari’s Dargah at Kaipadar is one of the most famous Pir shrines in Odisha, frequented by both Hindus & Muslim pilgrims. “It’s a lovely place & we really liked the serenity of the atmosphere & received blessing from Baba” , said Arun Patre from Bengaluru, who along his wife was on his maiden visit to Odisha & was fascinated by the diversity of the state & tourism potential.  Ashish Sarangi, one of the co-founders said “It’s very important to highlight these small & lesser known places beyond the Puri-Konark-Bhubaneswar triangle & we are dedicatedly trying to showcase such places through our curated tours”

Aitiha is an initiative to promote heritage & culture through guided tours & trails. Founded by a dedicated team from the twin cities of Cuttack & Bhubaneswar, Aitiha’s sole motto is to make more people aware of the lesser known sites along with the popular ones, be it heritage, culture or nature. More details can be found in its website  www.aitiha.com,  through the social media handles on Facebook (aitiha1), Twitter (https://twitter.com/aitiha1) and Instagram (aitiha_) or via email at [email protected].

Reliance Retail, TRENDS, announced the launch of its new Store in Rajsunakhala town…