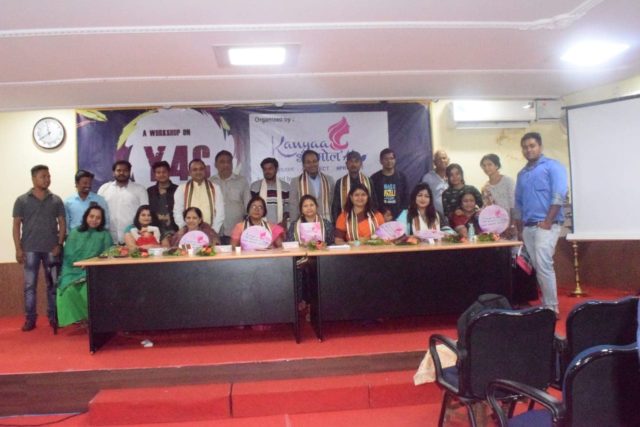 Bhubaneswar: On 24th November,2018,Saturday evening, an unique workshop Y4C–Youth For Girlchild was organised by Kanya Anmol Hai Foundation in collaboration with Odisha Diary Foundation and Rotary Club of Bhubaneswar, Elite in the premises of Odisha State Archive, Bhubaneswar. The main goal of the workshop was outlined as creating awareness among the young mass to save,protect and educate the girl child as well as to help the women to become responsible citizen of the society. The event presided by Mrs Amiyabala Parida, President KAH was attended by a group of energetic, dynamic and likeminded people.

Chief guest Dr.Haraprasanna Das,former GM,NALCO Corporate Communication as well as a motivational speaker advised the young mass to follow the right nd positive path.Smt.Santa Mishra,principal, Satyasai women’s college ,Bhubaneswar emphasised that society can reform only through proper education. Another noted social activist and PhD scholar in the department of English lllT,Bhubaneswar Mr N.K.Parhi was of the view that he adores and supports Feminism because women are the creator .Chief Speaker Prof.Kamalakant Das,the co-founder of Odisha Diary Foundation appealed men and women to work together hand in hand for the betterment of the society. He also agreed to become the Knowledge Partner of Kanya Anmol Hai.

Rotarian Saroj Das,the National Coordinators,KAH as well as the “Odisha Youth Inspiration Award-2018″awardee was felicitated at the event for his dedication and outstanding contribution in the field of social work.Educationist Dr Suchitra Das,Industrialist Anshu Tripathy,Social activists Binodini Subudhi and Mamata Bajpeyee were also felicitated and inducted by Mrs Sasmita Das,the Founder of KAH and team as the new member. State coordinator of KAH Mr Sagar Das managed the stage and Mrs Chumki Ghoshal,the Event organiser offered vote of thanks. President RCB Elite Mr Tamal Chaudhury and team was also present among with the members of KAH family who coordinated and contributed a lot to make the programme success.