The romantic Odia trackmakes a record by crossing 2 lakhs views in a span of 36 hrs. The Musical video is based on love at first sight depicting typically terrace love.

“TOH BINA” brings together for the first time Odia Industry’s fresh pair Raj Rajesh and Sradha Panigrahi along with Subhasis Panda. The duo is seen on the direction of well known Video Director –Basudev Dalai, who is also on DOP and Screenplay. Cinematography has been done by Anurag Das. 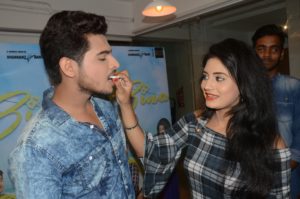 Lyricist S K Jabid Ali, who has written for many well known Odia tracks, also gave his soulful lyrics in this romantic track. The track is composed by “Vighnanz- The Band” and “Nabs & Saroj” and sung by the lead performer Durga.

Durga, said,“Coming up with new ideas and giving something very Hatke to my viewers was my goal. So, I have given my heart out to bring out something very different and we are hoping that people will love it.”

“TOH BINA is a trigger to the industry for good Music Video. This is an art of Film Making blended superbly with Music & cinematography. Our initiative to promoting good content comes to satisfaction with Music Videos like this”, said Dharitri Moharana PR Manager Amara Muzik.

“We have tried to set some new standards in Ollywood Industry and are happy that we have succeeded in so. I think we can bring a revolution in Ollywood Album Industry and can create a new magic, and we have done it pretty well with 3 musical singles.” Said Satyabrat Sanu Ratho, Director Prelude Productions. He also said that we are coming up with something different for entertainment industry in collaboration with Amara Muzik and others.