Bhubaneswar: Veteran Olywood actor and ever green Odia cine star Uttam Mohanty honoured with Kadambini Samman in the 17th Anniversary of Kadambini and 6th Anniversary of Kunikatha held at Rabindra Mandap on Sunday. The number of readers have decreased day by day due to impact of social media and electronic media. It is not a good sign. So, the people attached with literary world should take it as a challenge and take steps to attract readers, said Dr. Terry O’ Brien, renowned writer and motivational speaker. Eminent poet Prof. Sabita Singh said, the role of magazines and periodicals are very much important in women empowerment. 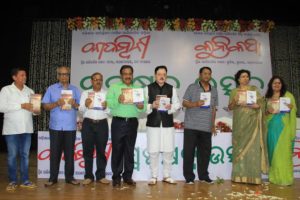