Bhubaneswar: A ten-member team of Odissi dancers from California, US, which is in city in discovering the various stories behind the beautiful dance form was overwhelmed with joy today, discovering the earliest depiction of fully developed dance form in stone_ in full costume, musicians and other accompanying artists at Udayagiri caves, while taking part in the 5th Monks, Caves and Kings, the weekly heritage walk in the Twin Hills.
The dancers, nine from US and one from UK are led by Revital Carroll, a dancer with 20 years of learning experience in Odissi starting from eminent Guru Kelucharan Mohapatra and later from Guru Bichitrananda Swain and now from Guru Sujata Mohapatra. Carroll is currently having her own dancing school for Odissi `Shakti Bhakti’ in USA and inspiring people to learn the classical dance form.
“The dancers from various walks of life, as members of the team will stay about three weeks in Odisha to learn different things about Odissi, i.e. how the beautiful sarees are made in Western Odisha with the unique tie and dye technique. They will also visit craftsmen, who manufacture the crown or `tahia’ used by dancers during the Odissi performances,’’ said Carroll.
Rumy Narayanan, who is learning Odissi from Carroll at Shakti Bhakti in California and came to Odisha for the first time, said “I am enjoying the place so much as Odisha and especially the Temple City Bhubaneswar is a beautiful place where the ancient temple art is showcased amidst the modern development.’’
Rumy, daughter of an Indian-American engineer father Hari Narayanan and Penny Narayanan, a native of US mother, is happy that she has got the opportunity to visit the land from where the classical dance form originated. “I am delighted that during the heritage walk in Udayagiri-Khandagiri Hills we are also experiencing the historical genesis of the dance,’’ she added.
Guide Satya Swarup Mishra said “we do not know, which one came first, the monks or the caves or the kings, but interestingly at Udayagiri there are also ancient caves with art by pre-historic men proving a point that the caves might be existing there much before the beginning of Jainism or Emperor Kharavela. However, while there were more than 100 caves during the ancient ties, currently less than 40 are existing as many could have been demolished during procurement of huge stones, for the temple building work in Old Town or Ekamra Kshetra.’’
10 XIMB STUDENTS JOIN MC&K:
Ten young enthusiasts from Xavier Institute of Managemnt, Bhubaneswar today took part in the 5th Monks, Caves and Kings. They not only enjoyed discovering the stories behind the rock-cut caves and also seeing the deep water body atop Udayagiri caves, they took a lot of selfies to freeze the moments in their cameras and Smart Phones.
Interestingly, five students of XIMB visited the 4th heritage walk at Udayagiri and Khandagiri on December 31 on the eve of the New Year celebration.
Avichal, a student of XIMB said “it was nice to know so many things from this heritage walk as we came across things like caves of monks, rock-cut art, rock art, beautiful carvings, man-elephants relationship and conflicts and several sociological angles of the ancient society.’’
Ankeeta Dash and Kriti Singh were happy to find new guests and Odissi dancers from US joining the heritage walk. “We are having two walks now in the city with different themes and should have more such event so that Bhubaneswar could have a plethora of options before the foreign visitors to choose from and discover the beautiful city in a more closer way,’’ the summerised. 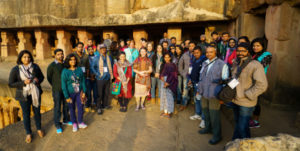 The visitors were also surprised to see the rock-cut relief images of Jain Tirthankaras on the Khandagiri hills and also asked interesting questions to the guide for better understanding of the concept of caves and their societal role in Jain philosophy and how the monks were staying there, being isolated for days, months and years away from the human habitation. Thirty-five walkers joined the heritage walk today.