New Delhi : The Directorate of Revenue Intelligence (DRI), the apex anti-smuggling intelligence and investigation agency functioning under the aegis of the Central Board of Indirect Taxes and Customs (CBIC), celebrated its 65th Foundation Day at New Delhi.

The celebration commenced with Union Minister for Finance & Corporate Affairs, Smt. Nirmala Sitharaman inaugurating the function here today, in the presence of Union Minister of State for Finance Shri Pankaj Chaudhary. Revenue Secretary, Shri Sanjay Malhotra; Chairman-CBIC, Shri Vivek Johri; and Members of the Board were present during the occasion along with Director General, DRI, Shri Mohan Kumar Singh. The function was attended by former Chairpersons and Members of CBIC, senior officers including ex-DGs of DRI. The event was physically attended by about 400 participants and was also streamed live through a digital platform with participation of hundreds of attendees from DRI, CBIC, International Organisations and other officers of Government of India.

Smt. Sitharaman appreciated that DRI destroyed more than 44,000 kg drugs during the Azadi ka Amrit Mahotsav in 14 destinations in the country and said that it is an exceptional show of performance and strength of DRI. The Finance Minister further stated that the aim now should be to bring the NDPS cases to their logical conclusion by apprehending the main handlers and perpetrators/financer in these cases. The Finance Minister further emphasised the need to enhance technology adoption, working on patterns, data analysis to be ahead of the smugglers and their modus operandi to counter the menace of gold and NDPS smuggling. She also emphasised on keeping strict vigil to prevent infiltration of data by adverse players. 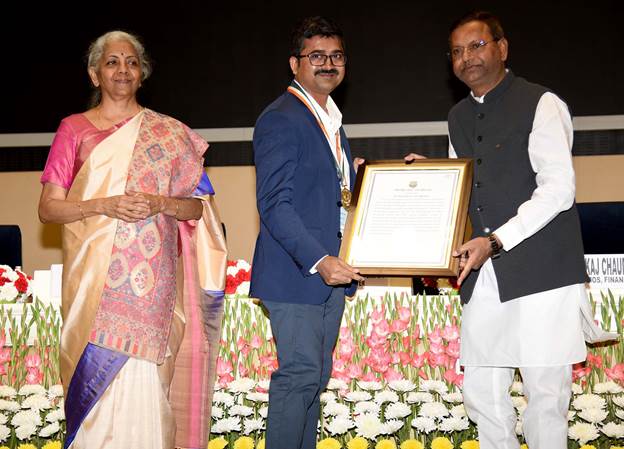 On this occasion, DRI ‘Utkrisht Seva Samman, 2022’ was awarded to Sh. R. Gopalnathan, an officer of the 1964 batch of the Indian Revenue Service (Customs & Central Excise) for his distinguished and committed service.

The function was also graced by Union Minister of State for Finance, Shri Pankaj Chaudhary who addressed the gathering on the occasion. Hon’ble MoS appreciated that DRI has distinguished itself as a very effective Enforcement Agency despite being small in size. Shri Chaudhary also mentioned some major NDPS seizures in the recent past and congratulated the professionalism of DRI in these cases. Hon’ble MoS also raised concerns on the smuggling of drugs and its effect on the youth. He emphasized on no tolerance policy in the NDPS cases.

In his address, Revenue Secretary Shri Sanjay Malhotra congratulated DRI on the 65th Foundation day and said that DRI has had a very long and distinguished record during these 65 years and wished DRI well to combat the challenges in the coming years.

The inaugural function concluded with the ‘Vote of Thanks’ by Sh. Abhai Kumar Srivastav, Pr. ADG, DRI, Delhi Zonal Unit.

[Mobility Inside] Connecting Cars to the Internet via Telematics