New Delhi :As a part of ‘Azadi Ka Amrit Mahotsav’ celebrations, the 8th International Day of Yoga 2022 was celebrated by the Ministry of Heavy Industries with Mass Yoga Demonstration based on Common Yoga Protocol, in Puri today. Dr. Mahendra Nath Pandey, Union Minister of Heavy Industries presided over the Yoga Day celebrations.

Addressing the gathering, Dr. Pandey recalled the address of the Hon’ble Prime Minister to the UN General Assembly on September 27, 2014, wherein he had mentioned that “Yoga is our ancient, traditional and invaluable gift. Yoga is the embodiment of the unity of mind and body, thought and action, restraint and achievement, and harmony between man and nature. It is a holistic approach to health and wellness. Yoga is not a mere exercise but a means of establishing identification with oneself and with the world and nature. It can also be helpful in fighting climate change by changing our lifestyle and creating awareness among us.”

He further added that today Yoga has spread globally and as a result, Indian culture has further strengthened its identity in the world.

The Secretary (Heavy Industry) was also present on the occasion. CMD, BHEL and Directors on the board of BHEL also participated in the event, along with other senior officials of MHI & BHEL, local administration and a large number of people and school children.

The Yoga day event at Puri was live-streamed across all units and offices of BHEL and other CPSEs under MHI. During the event, Hon’ble Prime Minister’s address to the nation was live-streamed, from Mysuru Palace, Karnataka, to a large number of participants. To commemorate the International Day of Yoga 2022, country-wide celebrations were organised at 75 iconic places under the theme of ‘Yoga for Humanity’. 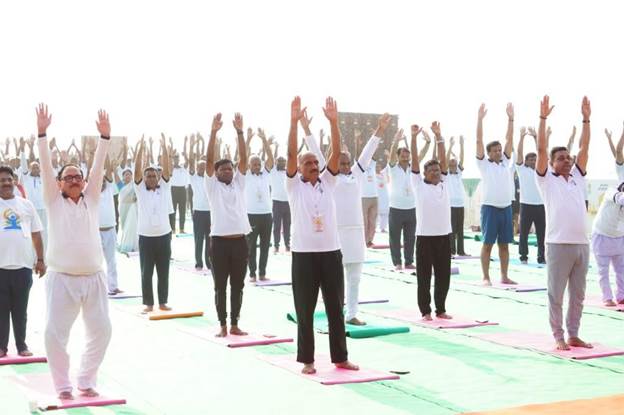 Recognising Yoga’s universal appeal, on 11th December 2014, the United Nations had proclaimed 21st June as the International Day of Yoga to raise global awareness about the many benefits of practising Yoga.