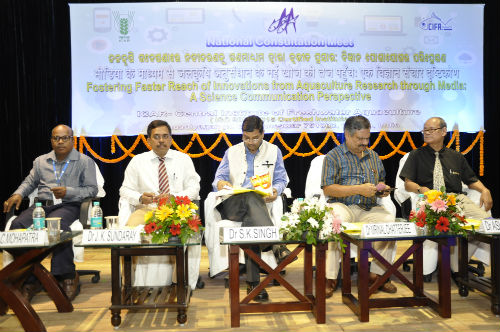 Bhubaneswar: The National Consultation Meet on “Fostering faster reach of Aquaculture research innovations through media in a science communication perspective” was held at ICAR CIFA Kausalyaganga, Bhubaneswar on 27 October, 2017.
Dr. S.K. Singh, Project Director, DKMA , ICAR graced this meet as the Chief Guest. He hailed ICAR-CIFA’s effort for organising such consultation meet. He was hopeful that media interactions would certainly help enhancing visibility of ICAR in public space.He acknowledged that media had played a great role in making green revolution happen in the country in 1966-67. The Union Ministry of Agriculture and Farmers’ Welfare will shortly launch a web portal for agricultural technology management in the county, he added. He also advised the scientist and others to be more friendly with media which will help in wider dissemination of the farmer-friendly information.

The keynote speaker Dr.Mrinal Chatterjee, Professor and Regional Director, Indian Institute of Mass Communication (IIMC), Dhenkanal, Odisha urged mainstream media to cover agricultural inventions and innovations developed by farmers. He also stressed on the need to align research institutes’ objectives with the priorities of media. Prof (Dr). Ashok Panda, General Manager and Editorial Coordinator, Sanmarg, Bhubaneswar, stressed on harmony and healthy relationship between media and the organisation.
Earlier Dr J K Sundaray, Director, ICAR-CIFA welcomed the guests and elaborated on the genesis of the meet. He underscored the importance of media in creating awareness about improved agricultural technologies. Innovations, success stories and best practices adopted by the entrepreneurs should reach to the end users, he added.
In the second session lead paper was presented by Dr. H.K De, Principal scientist, ICAR-CIFA, Bhubaneswar, He gave a detailed information about technologies developed by ICAR-CIFA and the variousmeans by which CIFA is reaching out to the farmers. Mr. B. Kolappan, Deputy Editor, The Hindu, Chennai, explained the role of media in transfer of technology. He also narrated the problems of the print and electronic media and advised to have a balance with both the media. Mr. AdhirajSukumar Nayak narrated the role of Doordarshan in transmitting agricultural News. He also said that Doordarshan plays a pivotal role in transfer of technology to remotest corner of the country. Dr. Rasheed Sulaiman, Director, CRISP, Hyderabad gave a detailed account on the use of the social media. He stressed on more active use of social media for professional growth and development.Dr. Suresh Babu, IFPRI, Washington DC, USA made a presentation through Skype on Science Communication in an R&D and Extension.The consultation meet was attended by over 130 delegates. Among others who spoke were Mr. AvinashUpdhayay, Digital Green ;Mr. Eashwar Anand, Managing Editor, Fishing Chimes, Mr. Jayakumar, Editor, KrishiJagran ; Dr. K.S. Shobana, Editor, Indian J. Fisheries ;Mr. Pradeep Dutta, Radio Kissan, Bhubaneswar.

Fruitful deliberations were made by the experts during the meet and it took a stock of the present state of affairs of media outreach of aquaculture research. It was felt that a multi-pronged communication strategy would be the best option to reach the different sects of the stakeholders of aquaculture industry. Dr B.C.Mohapatra, Pr. Scientist, ICAR-CIFA and Dr P.N.Ananth, Programme coordinator, KVK, Khordha coordinated of the program.