Bhubaneswar: A nation’s growth is dependent on its society. A prosperous society makes way for a healthy and developing country. But India as a country is still suffering from number of social problems even after 60 years of independence. Illiteracy, poverty, unemployment, population growth, child labor, dowry, domestic violence, casteism, alcoholism, drug abuse, corruption along with countless other social issues are the pollutant of a otherwise spiritual country which India is known for. Despite the industrialization and modern way of thinking a large margin of people are fighting social dogmas even today.
As filmmakers it is our prime duty to try bringing a change in the society. We are morally responsible to play our part by analyzing the issues and communicating suggestions and solutions. Highlighting various issues through cinematic forms will promote the social campaigns and help sensitizing people towards the topic which is the need of the hour.
With the similar thought of mind, SPARSH – a production house of Odisha, organized the 2nd edition of short film festival – IGNITE with the theme ‘social issues’. Anything that negatively affects people within a society that people care about can become a social issue. Ignite 2019 welcomed films that made on any social issues which you as a filmmaker think requires exploration and analysis. The award giving ceremony was held on 7th February, 2019 at Odissi Research Centre, Bhubaneswar. The jury of IGNITE 2019 included renowned journalists of Odisha Mr. Sampad Mahapatra and Sandeep Sahu and the young and National Award winner filmmaker Amartya Bhattacharya.
Speaking on the quality of films, Sampad Mohapatra said, “Film quality this year is better than previous year. There has been considerable improvement in both concept and quality. I hope this Ignite Film festival will continue every year and we will get young and energetic film makers coming up every year.”
Expressing his admiration to this initiative of Ignite Film Festival, filmmaker Amartya Bhattacharya said, “Ignite film festival is emerging to be one of the very important activities and events in the city providing responsible platform to the young film makers. They are supporting the young film makers and the film making culture in the state as there are very few avenues in the state supporting this. With this support we hope to come up with lot many young film makers from the state in the coming years.”
Kaisa Pfoze, a young woman filmmaker from Manipur dominated the evening by winning the Best Film award for the movie ‘Sunset Years’ and a prize money of Rs 20,000. The movie ‘Sunset Years’ shows young India with growing aging population. It presents the highs and lows of modern day India’s aged community through the life of happily retired Dada Dadi Park Cricket team Mumbai, the never give up Parkinsons Movement and Disability Society Mumbai, poor, neglected and helpless elderly of Mumukhshu Bhavan, Varanasi. The film further takes the story deeper back to thousands of years where the Tamil Community buried their immobile aged alive. This social treatment still continued today in a different form known as ‘Thalaikoothal’. It speaks of the past, present and future of aging in India. 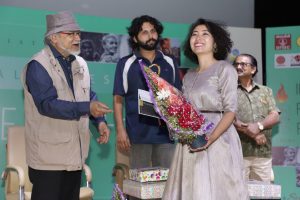 “It was a wonderful experience for me to be a part of Ignite Film Festival. ‘Sunset Years’ is a film about senior citizens and the growing aging population of India. We have tried to look back on thousand years ago how the Tamil community had handled the senior citizen issues and also with various statistics we have tried to portray what probably India is going to head into as far as aging is concerned and this film is made to sensitize the young generation of the nation.”
Abhishek Swain, another young independent filmmaker bagged the 1st runners up award for the film ‘Few Miles Away’ and prize money of Rs 10,000. The film portrays how the city rises up by destroying the nature & it’s impact on our generation.
The movie ‘Mukti’ by Bibek Panda won the 2nd runners up award and prize money of Rs 10,000. A young transgender is unhappy to hide his true identity from the world. He connects to his real identity inside closed doors only. While trying to kill himself he finally decides to reveal truth to others.

MCL showcases use of VR, AI technology in coal mining at MiO 2022