Singer Sumedha Karmahe Picks A Page Out Of Her Musical Journey

Hailing from Raipur, singer Sumedha Karmahe has nailed her impact over the Hindi film industry with her voice. Starting her journey as a popular reality show contestant, Sumedha transitioned from a live performer to a capable playback singer in Hindi films over the years. Some of her biggest hits include ‘Toota Jo Kabhi Tara’, ‘Nazm Nazm’ and so on. She spoke about her journey as a singer in the Hindi film industry and her latest release ‘Ishqe Di Doriyan’.

Sumedha discussed what she had been doing in this pandemic period. She said,” I am not in Mumbai right now. I’m at Raipur now. I had to be with my sister and niece, who were tested positive for covid. But unfortunately, I got tested positive after getting here too. So I stayed here until I recovered completely. Now I’m completely recovered and I’ve got back to singing.”

She threw some light on her new song and its release. She said, “This song was recorded way before the lockdown, but the video couldn’t be made. Now that I’m in Raipur it’s not possible to make the video. Then we decided to release the audio because ultimately the song is important. The song is called ‘Ishqe Di Doriyan’. It’s a sweet love song composed by Mann Taneja and written by Gaurav Pandey. I’m sure people would love it.” 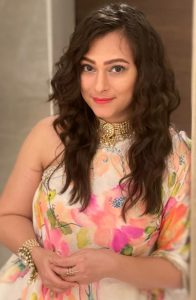 She appeared in the famous TV reality show Saregamapa where she was given the tag of ‘Barbie Doll’. She said, “I got this particular tag because of the kind of costumes featured in the show. In one of the episodes, when we were having the trial, someone told me that I looked like a Barbie doll. After that, Bappi da and Aditya Narayan started calling me Barbie doll. That’s how the Barbie doll came up. People still remember the tag. They don’t know my real name. Many times they’ve come to me and asked are you ‘Chattisgarh ki Barbie doll’. So that identity is still alive and I’m happy that people recognize it. But I’m not a Barbie doll in real life and I choose to enjoy putting on T-shirts and tracks. I just had one Barbie doll growing up.”

She credited Saregamapa for giving her the platform as a young artist and how it helped her ahead in her career. She said, “I always had the passion and after coming to Saregamapa, the passion turned into a profession. Can’t get any luckier than that. Just like you have BC and AD for ages. Similarly in my life, I have before Saregamapa and after Saregamapa. The kind of life I dreamed about since childhood is happening now. I always wanted to come to Mumbai and I like this hectic life. Saregamapa had great TRP ratings that season and all the contestants had become household names. I was lucky enough to be a part of that particular season. After the seasons I did a lot of shows in the next 2 years and I wasn’t home most of the time. So when the shows started getting fewer, I started figuring out what I need to do over here in Mumbai”.

“I realized that if you want to do playback singing you have to visit music directors, submit them your demos and thankfully due to Saregamapa, a lot of musicians had listened to me. So it wasn’t difficult to approach them. Your voice is the most important aspect of playback. You can rectify a lot of things using technology, not voice and emotions. I did a few playbacks at that time but they just came and went”, she further added about the recognition she got from the reality show

Sumedha talked about the first song she recorded in a studio and her first big break in Tuta Jo Kabhi Tara. She said, “There was a movie called Tere Sang in which there was a song ‘Tere Bin’ made by Bappi da that I and Raza Ha had sung as a duet. That was the very first song I ever recorded in a studio. It was a pretty good experience. Then for the next few years, I did a few singles and covers. In 2016, I got a break when I did Tuta Jo Kabhi Tara. After this song whenever I went for recording, they always wanted me to have the ‘Tuta Jo Tara’ tone. People were recognizing me due to that song” 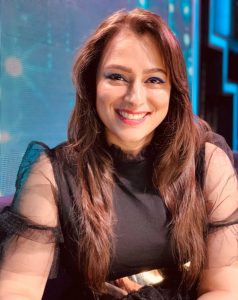 She then recalled meeting musicians Sachin-Jigar for the first time and how she went on to work with them. She said, “In the Radio Mirchi award function, one of my very dear friends Raja Hasan had to pull me to meet Sachin-Jigar as I am a bit hesitant to approach and start a conversation. Sachin Sir recognized me and said Sumedha, we were making a song and we were thinking about you as you have a nice voice. So I didn’t have to introduce myself. Then I had given my vocals for many song scratches for Sir. Tuta Jo Tara was recorded in 2015 and a lot of textures were being tried for even one line. The hook line of the song has a very high note. So a lot of experiments were done with it. The final recording was a scratch recording as well which I sang as an experiment for the texture. One day, their manager called me and asked for my details for the song Tuta Jo Kabhi Tara although the final dubbing wasn’t done yet. But he informed me that no it’s finalized. Later on, I got to know Atif Aslam gave the male vocals in the song.”

Sumedha went on to explain about artists emerging from reality shows and the recognition they get. She said, “People who emerge from reality shows have a face value as people follow them throughout the season. They could identify the particular voice of the contestant when they performed. But the singers who don’t come to reality shows are not that easily recognized by the people. There are so many playback singers who’ve recorded good songs, but the audience doesn’t know if it’s their song when they perform live. So the face value is important.”

“People say that singers show up at reality shows and then they vanish. Well, they don’t vanish. The visibility of singers is relatively less than actors. They only appear on shows related to music. Therefore music videos are quite important and nowadays almost all singers feature in the video of their song. Though I’m pretty bad at acting. I remember an instance where a director got tired of explaining to me a way to blush and in the end, they asked to smile a certain way to get the cut”, she further said stressing the fact that singers need to be featured in their music videos. 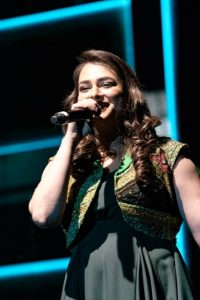 She highlighted one of the biggest hits in her career ‘Nazm Nazm’. She said, “Nowadays songs are mainly male-oriented and female voices are adjusted somewhere. Either you need to sing really low scale or very high scale. Nazm Nazm was meant to have a separate version and the song was programmed after I was asked about my comfortable scale. When I reached the studio, Arko Sir, who is the composer and lyricist of the song, gave me the freedom to sing the way I wanted as I knew the lyrics and composition. The song was done in 55 minutes. The freedom that Sir gave made things even easier. I went to the studio for recording this song from the rehearsal of a show and then returned. Now people call me ‘Nazm Nazm’ girl. A lot of people cover this song and tag me on their Instagram and Facebook. I feel blessed.”

She spoke about a few instances when her songs were played in public and the reaction of her friends and other people around. She said, “There was an incident when Tuta Jo Kabhi Tara was being played in a spa. I had a friend with me who started telling everyone that it’s her song. I felt a bit embarrassed and would have been fine had it not happened, but it feels great if people recognize my voice. Once I went to watch a movie in the theatre with 10 of my friends. We have a sort of pact that if an artist’s song got featured in a movie, he or she is going to take everyone out to watch the movie. When the song ended in the movie, they all started clapping and one of my friends Minal got so excited that she jumped on her chair.”

In the end, Sumedha spoke about her upcoming projects. She said, “There’s nothing much on right now. About 2 or 3 projects are pending for the last 2 months because I’m in my hometown. There’s a song with Mann we’re working on and there is a Chattisgarhi folk song by Rajat Tiwari, who’s from Raipur as well. He made a song in Hijack. Hopefully, we’ll record that song in a couple of weeks. It’ll be released in 2 months. If the region where you come from has such great folk music, it should be promoted well. Then there’s a cover song which you’d get to know when it’s released.”