Music is a therapy for singer Debanjali B. Joshi who has recently come up with the reprise version of ‘Bakhuda Tumhi Ho’ on YouTube channel ‘Volume’ of popular music label Tips Music.

Telling us about the journey and conceptualization, she says, “A few months back, me and Akash Jaiswal had been to Tips Music’s office. They liked our voices and suggested us to do a cover version of one of their iconic songs. That’s how we ended with selecting the song. Bakhuda Tumhi Ho is one of our favourite songs from Tips Music.

She further tells, “The original version of the song has been sung by Atif Aslam and Alka Yagnik. And our generation looks up to these two stalwarts. So, while doing the reprise version, we decided to blend our style with the song. It has been a challenge to recreate that same feeling at the same time and introducing new sounds. We ended up deciding our vocal textures, in which way we can portray the song so that it would get much love as the original one and spot a new flavour in our audio.”

The cover video of the song narrates a simple romantic story which makes it different from other videos. Debanjali says, “About the cover video, we had it in mind to bring something unique and not making it look like a regular cover video. We had actors Akshay and Sheetal with us. Both of them have been into tv serials of respective genres. That’s how we thought to bring them onboard and narrate a good story through them. First, we decided on the story and then cast them. That’s how the collaboration took place.


According to me, a cover or a recreation is pretty much similar unless a recreation was done in a new composition apart from the main part of the song. For me, its a new composition with new lyrics keeping the main hook line same to which people can enjoy the newness as well as connect to the original one. Well, the cover version is the individual’s version with the same melody and lyrics. But here you could experiment with changing the arrangement and production, singing style. One could make it stand out in that way.” 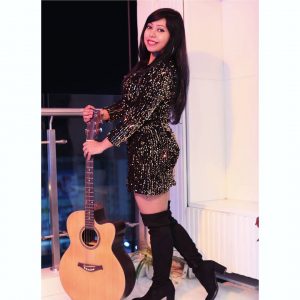 Since childhood, Debanjali had realised that music can change any emotional state.

Some of her remarkable works include Chhoya Chhuyi (a duet with Armaan Malik for the Bengali film “Jio Jamai” released by Zee Music), Yaara Tujhe (Intense Mix- with Shaan), Kore Kore (‘Amavas’ Telugu version released by T-Series), the title track of the Gujarati film ‘Kachindo’ for which she was nominated in the GIFA AWARDS 2019, and jingles for ad films & TVCs for brands like Coca-cola, Lakme, Slice, AJIOlife, Reliance Jewels, Amazon prime video, Axis Bank, Hero Honda, etc

She says, “The influence of internet on my career has been visible for last 1-2 years as every label/production house/company has been putting up their works on their respective social media platforms which helps new artists like me to reach our audience faster and better.
I’m grateful to my audience who are connected with me through social media platforms and have been showing their love for my music every time I have a new release.
Social media has helped a lot of people these days in terms of spreading their art and I’m grateful to have the resources to use it at its best

Recently, Debanjali has become a part of Irrfan’s last movie. She says, “I have given my voice for the motion poster of late actor Irrfan’s last movie. I consider myself fortunate enough being a small part of this film. The poster has been recently released by the production house of the film. Its might be releasing in the first half of 2021.”


“I have sung for two web films recently, but I am not sure about which platform they going to be released. Last year before lockdown I had sung for a Marathi film; hopefully, it’s going to be released this year. I have also sung for one Telugu film. So yes, things are happening well. On my terms, I am doing a collaboration with one of my friends and we are aiming to release it through Saregama soon,” she ends.