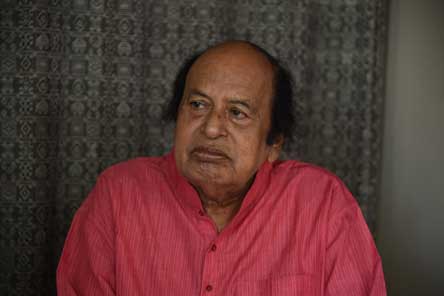 Bhubaneswar: In keeping with Guru Kelucharan Mohapatra’s heartfelt wishes, we at Srjan have been conducting this festival for the last 23 years. After his passing in 2004, this event has assumed special meaning for all of us-his students and all those whom he has touched worldwide. We remember him as the shrestha Guru, as a kind & concerned parent, as an incredibly skilled dancer and percussionist, as a cultural Ambassador for India who has carried our rich dance heritage to many countries, as a thinking person, as father to all his disciples-in fact, as an unforgettable and dearly beloved presence in our lives. The OMC Guru Kelucharan Mohapatra Award Festival Ceremony is a premium festival of the country, recognised across Odisha and highly appreciated in various recognised cultural centres of India. Every year, artistes of national and international repute scintillate the audiences. Year after year, the festival invites unparalleled viewership with a large sprinkling of foreign tourists, critics and connoisseurs alike. This year’s festival is scheduled to be held from 5th to 9th September 2018 at Rabindra Mandap, Bhubaneswar.

Starting with a single-day festival in 1995, the Award Festival has now grown into a five-day long celebration of scintillating performances featuring four classical music & four classical dance performances. The aim here is to give our Odisha audience an exposure to classical fare of the highest level; we aspire to sensitise captive audiences, especially the younger section and students, so that an enthusiasm for the subtle flavours of classicism is planted in them. The NALCO Guru Kelucharan Mohapatra Award has been presented on an annual basis in the field of Dance, Music, Theatre & Cinema to exceptional individuals with a cash prize of Rs. 1,00,000/- to each artiste and a citation. Two such awards are presented each year. Additionally, the NALCO Guru Kelucharan Mohapatra Yuva Prativa Samman will be presented with a cash prize of Rs. 25,000/- each to four meritorious young artistes in the area of classical dances and Odissi music for their continuous outstanding performances.

Renowned artistes from inside and outside the state will be performing in the festival (Artist list attached). On 9th Sept, the concluding day of the festival noted film personality Smt Hema Malini ji will grace the evening.

After the GKCM Award presentation on 9th September two new choreographs will be showcased by Srjan – the first one is “Kirvani Madhurima”, a neo-classical innovation and an amalgam of traditional Odissi with contemporary music based on Raga Kirwani and the second is “Maati”, a presentation in Odissi dance derived from an inspiring and popular poem by the iconic Odia poet Sri Radha Mohan Gadanayak. The dance choreography for both the items have been done by Ratikant Mohapatra. The music composition composition for Kirwani Madhurima is by Dr. Vizarsu Balasubramanium and script by Pt. Nityananda Misra. The music composition for “Maati” is by Laxmikant Palit and the script adaptation is by Jaydev Das. Short synopsis for both the items are enclosed below:

This dance presentation by Srjan, titled “Kirwani Madhurima” has chosen to embark on new pathways of innovation. While it continues to have the distinct character of a traditional Odissi choreograph, there are elements of contemporary dance expression which are used to heighten the appeal of novelty. By creating an amalgam of the classical and the contemporary, we have carefully introduced elements in both the music and the movements, which sustain its very own individual dramatic impact. As it were, a dressing up of the Odissi soul and body with colours that are new, easily identifiable, and memorable.

The Creator’s grand design of the universe embraced the disparate elements of the sky, the sun, the moon, the clouds, the wind, and also the Earth. With the exception of the Earth, all other elements occupied an ethereal space, high above the Earth. And each element had an exaggerated view of its own importance, asking for a superior place in the hierarchy of being. When the Earth remains silent about her heart’s desire, the Almighty wonders at her silence. Mother Earth replies that God’s every wish is her command and though the Almighty has misgivings about her forbearance of his challenging responsibility for her, she asserts that it is her nature to accept everything she is destined to be burdened with. In saying so, she is proclaimed as the exalted empress of the universe by God, who showers her with his praise and blessings. Written by the iconic Odia poet, Sri Radha Mohan Gadanayak, this poem is both inspiring and thought-provoking.