A true believer of dreams, Anurag Panda says that music happened to him during his college days in Bangalore. His selection in the Indian Music Association (Kalaah) and various intra and inter college events provided him with a chance to perform both in group and solo singing.
“We bagged the first prize at ‘Sargam’, a state level inter collegiate cultural fest in group singing. Other than this, I have few more credits as a solo performer.”

Apart from music, Anurag is also an ace basketball player. He has represented the state in multiple national tournaments and have the experience in captaincy. He says, “Once we bagged the silver medal in one nationals while I was the captain of my state team.” 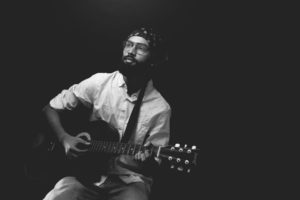 However, music being his call, Anurag did the best utilisation of lockdown and upskilled himself. He was a part in a National Level Online Singing Competition where he made it to the finals out of 700+ participants from India and overseas.
“I got to perform infront of Lisa mishra it was huge moment,” he expresses.

Anurag’s cover songs are on Gaana app and on Vyrl Originals Instagram handle.

Adding to it he says, “Music has really grown somewhat during the lockdown where I started believing in myself and working for it. Fortunately, my works are getting noticed by the people from the industry.”