“Odisha Has Been A Constant Backbone To Sports,” says Olympian Fencer Bhavani Devi

On her recent visit to Odisha, Olympian Fencer C. A Bhavani Devi expressed her gratitude towards Odisha for constantly supporting and promoting sports in India. She said, “It always feels great whenever I come to Bhubaneswar. And it’s always a great honor to meet Mr. Achyut Samanta because the kind of support he is giving to sports and sportspersons is incredible for the country.”

Born to Telugu parents in Chennai, Bhavani Devi Started her career in sports in the year 2003. She did her schooling at Muruga Dhanushkodi Girls Higher Secondary, Chennai, and then attended the St. Joseph’s College of Engineering, Chennai and went on to complete Business Administration from Government Brennen College in Thalassery, Kerala.

In 2004, she was introduced to fencing at the school level. After finishing class 10 she joined the SAI (Sports Authority of India) Centre in Thalassery, Kerala. At the age of 14, she appeared at her first international tournament in Turkey, where she got a black card for being late by three minutes. In the 2010 Asian Championship in the Philippines, she bagged a Bronze medal. 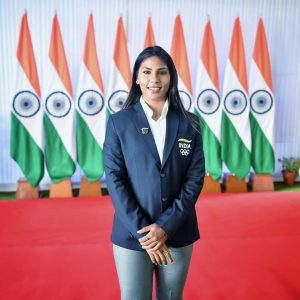 “Initially when I joined fencing, I didn’t know much about it then. But soon after I was explained about it, I realized how unique is this sport and that made me fall in love with fencing,” she went on.

Starting from the Bronze medal at the 2009 CommonWealth Championship held in Malaysia, Bhavani Devi has won Bronze medals in 2010 International Open, Thailand; 2010 Cadet Asian Championship, Philippines; 2012 Common Wealth Championship, Jersey; 2015 Under-23 Asian Championship, Mongolia, Ulaanbaatar, and 2015 Flemish Open. In the 2014 Asian Championship under 23 categories in the Philippines, she bagged the Silver medal becoming the first Indian to do so. After her successful 2014 Asian Championship Tamil Nadu Chief Minister Jayalalithaa honored her with INR three lakh as financial aid for training in the US. In 2015, she became one of the 15 athletes selected ‘Go Sports Foundation’ for the Rahul Dravid Athlete Mentorship Programme. Bhavani Devi has received 2 Gold Medals, one each at the 2012 CommonWealth Championship, Jersey, and the 2014 Tuscany Cup, Italy. She finished fifth in the Viking Cup 2016 Icelandic International Sabre Tournaments held at Reykjavik. She won a silver medal in the women’s sabre individual category in the 2019 Tournoi Satellite Fencing Competition in Ghent, Belgium, after losing to Bashta Anna from Azerbaijan. She made history by becoming the first Indian to win a gold medal at the Senior Commonwealth Fencing Championship in Canberra in the sabre event. She beat Catriona Thomson from Scotland in the semi-finals and then defeated England’s Emily Ruaux. She trains in Italy as well as at the Sports Authority of India in Thalassery, Kerala. 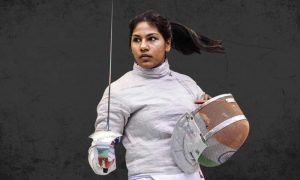 Sharing her experience of the Tokyo Olympics and future goals, Bhavani said, “Post Tokyo Olympics, fencing has been recognized in India as a sport by all kinds of people. The effort I have given to this sport has brought me the recognition of an Olympian. But the journey has to go on. My dream is to win an Olympic medal and I will make it happen in Paris.”