Dhenkanal: Terming development journalism as “anything that impacts and improves the lives of a large section of people,” Ashok Das, founder and Chief Executive Officer of Sankalp Television urged students of Indian Institute of Mass Communication (IIMC) to focus on journalism for people. Speaking from his over  Das said this while delivering a lecture on ‘Reporting as a tool for development’ at the campus’ premises on Wednesday afternoon. This event was organised to felicitate meritorious students of the educational institute with fellowships.

After the ceremonial lighting of lamp by Dr Mrinal Chatterjee, Professor and Head of IIMC-Dhenkanal, Mrs Bidyutprava Mohapatra and Shri Ashok Das, English Journalism student Ms Nupur Chowdhury received the first Satya Mahapatra fellowship and Odia Journalism student Ms Sukanya Jena was honoured with the 16thDr Radhanath Rath fellowship. They were handed a certificate and a cash reward of Rs 10,000 each. Sambalpur girl Sukanya and Kolkata lass Nupur got the scholarships for securing highest marks in their respective courses in the academic year 2016-17. These fellowships are awarded yearly to meritorious fellows. 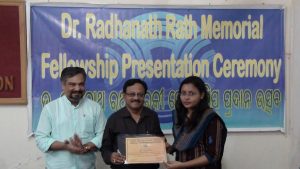 Dr Mrinal Chatterjee elucidated on the institution of fellowships and their importance in promoting erudition. Mentioning the timeless imprint of Dr Radhanath Rath, former Editor of Samaja newspaper in Odia journalistic history, he said, “Founded by Gopabandhu Das, Samaja, in its heyday, became synonymous with newspaper due to the efforts of Radhanath Rath. So, when his son Dr Nilakantha Rath wanted to start a fellowship in the legend’s memory here, we welcomed him and the fellowship started in the year 2002-03.” Hailing Dinalipi newspaper as a well-edited print medium, Prof Chatterjee stated, “Anyone who compares different newspapers will discern how nicely Dinalipi was edited when Satya Mohapatra was at its helm. It was also the newspaper to break several important stories, which forced its competition to follow suit. This eponymous fellowship will be a remembrance of Satya Mohapatra’s brilliance.” He encouraged students to follow in illustrious footsteps of the two lettered men.

Recalling her father’s contribution to media, former IIMC alumnus Swati Mohapatra called Satya Mohapatra “a complete media man.” Speaking at the ceremony, she said, “After working with the Government for including setting up of Press Information Bureau in Imphal, father got bored and hence,Dinalipi was born. Free from political ownership, it was an independent press. My father started 2 programmees on Doordarshan v.i.z., Aaina and Darpan.We want to rever his memory and are thankful to the head of IIMC-Dhenkanal for facilitating this.”

After the presentation of fellowships, two monographs – ‘Media Mind V’ and ‘Sambada Prasanga’ – were released. Along with Satya Mohapatra’s wife Mrs Bidyutprava Mohapatra, daughters Swati, Sweta and Sukanya graced the occasion and donated books written by the erudite Editor and littérateur to IIMC’s library. Members of Bhubaneswar Sahitya Samaj were also present.

Dhenkanal-Magji about to get GI tag !!!