Bhubaneswar: The Kalinga Literary Festival (KLF) on Sunday organised the second KLF Corner here in collaboration with famous Oxford Bookstore at the Pal Heights, Jayadev Vihar to engage with the literary community and the youths. In the second edition, literary youth icon Dipak Samantray joined the conversation with living literary legend Shri Jagannath Prasad Das. He interacted with literary lovers during the session.

“I had decided long back to read other people’s poems before reading mine,” said J.P. Das, and commenced a lovely half-hour of poetry reading. When asked about what he liked in poetry, he said that something which triggers his heart is what he would consider as good poetry, and that others are now free to interpret this on their own terms. We, further, shared our bewilderment on why it took him so many years to write the poem ‘KALAHANDI’. He answered, “I don’t remember under what circumstances I wrote it, but I have a deep connection with it, and such a connection cannot be summed up soon.”

Sir’s session was full of random insightful inputs, as well, that are generally misinterpreted. “The one who writes a poem cannot read it properly himself; it is always other people who read it well for him,” he said, at one point in the session. There was a much necessary segment on Cuttack, where he wrapped up his emotion. “I have spent a lesser portion of my life in Cuttack, but that doesn’t mean I’m detached form it. My life has been geographically versatile. But I belong there,” was JP Das’s view on his relationship with Cuttack. He was asked about his writing on Puri Paintings, and about having stayed 8 months there during that phase, with the painters. “My research told me that we have resources and stories about other aspects of Odia Culture, but not much about the depiction of the paintings here. So I had to vouch for it,” he facilitated.

Then we geared up for some literary divides, and the world of a child in literature. “I tried to organise an international children’s film festival. Sometimes, children’s poems aren’t for children; adults understand it better. Adults should also read children’s poetry, to dwell upon life on brighter notes,” he said, when the conversation moved forward to growth, development and children’s literature. The highlight of the session was the minute Sir said, “We think Hindi writers are merely of National level, and English writers in India are of but international level. That notion needs to end.” The words, here, were a new swirl of wind in a scenario of stereotypes.

One among our audience brought up the question that all of Sir’s readers feel the need to sleep on; the lack of punctuation marks in his poems. J.P. Sir held the beautiful concept that the readers should know it themselves, when they need the voice inside their heads to be punctuated; they should know where to pause and where to not, for this is the art of reading. “I think if I add marks and clauses, and decorate sentences, I will creates inconvenience,” he added. On the temperament of human nature, his take was brilliant. “I think of the cities, while writing. And not about the citizens. The citizens change, with time. The history of the cities remains the same.” We got the hidden glimpses of Sir’s self introspection, with the ultimate question about him penning down his autobiography. 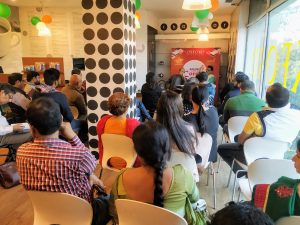 “I don’t have that much of courage and honesty, which it takes to pen down your own life,” he said, engraving on our minds that literature is not a world of lies where we hide from truth, but a land of mirrors where we have to see our own faces and meet our own eyes more often than we would desire to. “The madmen are discarded by the society, and poets belong to this category,” said JP Das.

Founder Rashmi Ranjan Parida strongly believes that there is an urgent need to engage the youth icons with the legends in the literary world. He has plans to invite all living legends of Odia literature and have conversations on their own writings, comparative insights, discussions on books and authors those who have won the national and global prizes. He said that there is no better opportunity than this to listen to these great voices and meet them in person and get their autographs and selfies. The program was co-coordinated by KLF team member Saranya Das, Debamitra Mishra, Pradyuman Sekhawat and others.

Budget Session of the Odisha Legislative Assembly from today