Bhubaneswar: As part of the Street Art and Murals Project (STAMP) of the Bhubaneswar Municipal Corporation (BMC), city-based Bakul Foundation has mobilized five famous international street artists, Tracy Lee Stum, Anat Ronen, Zee Schindler, Julio Jimenez and Sayak Mitra.
The team will be in city from 1st to 15th November in which they will be painting on the sidewalls of the flyovers on the National Highway in the city and create some iconic murals that would give Bhubaneswar its artistic stamp in the entire world. The work would be ready before the World Cup Hockey.
Tracy Lee Stum, the world renowned street artist, particularly known for her spectacular interactive 3D chalk paintings has been an “Arts Ambassador of America’’ and has travelled to different countries on behalf of the Arts Department of the USA demonstrating and teaching 3D street art. During her trip to India, she had conducted a workshop with young artists and children at Bakul Foundation in Bhubaneswar as a guest of the US Consulate, Hyderabad.
It was the first time, residents of the city experienced the beauty of 3D interactive chalk art. Tracy was inspired by the story of volunteerism at Bakul and came by herself in 2016 to conduct another pro-bono workshop with artists at Bakul. On both occasions, Tracy helped create wonderful illusions on the road in front of the Bakul Library in Satyanagar.
Bakul Foundation, which has played a major role in the STAMP initiative of BMC and had undertaken the painting of the flyovers at Rajmahal, Acharya Vihar and Jayadev Vihar, proposed to BMC to invite the best street artists of the world to leave their artistic stamp in the city and thereby create iconic murals in the city.
BMC agreed enthusiastically and then Tracy put together a team of five of the best street artists from across the world, who agreed to come to Bhubaneswar to paint.
Anat Ronen from Israel and currently based in Houston, USA tries to reflect her views on current affairs, injustices all over the globe, social matters and love for animals will be painting at Acharya Vihar. Since the pillars of the flyover have already been painted on the theme of birds given its proximity to the Natural History Museum, Anat will be painting a huge pangolin, drawing attention to the illegal trade in the animal through Bhubaneswar. She will also paint the stunning Indian roller bird, the state bird of Odisha.
Zee Schindler, originally from Brazil and now based in Las Vegas, USA is great at photorealistic murals and she will be painting on the flyover at the ID Market turning in which she will present a 3D illusion of trucks bursting out of the walls and eco friendly bulbs fixed to the wall.
Julio Jimenez, originally from Mexico but based in Los Angeles is particularly great at illusions on the theme of sports will be painting at the inside wall under the Jayadev Vihar flyover, where he will create a 3D illusion of hockey being played as the murals are coming up before the Hockey World Cup.
Sayak Mitra, originally from Kolkata, but now based in Los Angeles again, has been influenced by pop art and social realism and has created the design for a long mural on hockey. Sayak could not travel to Bhubaneswar but his painting will be executed by the others. 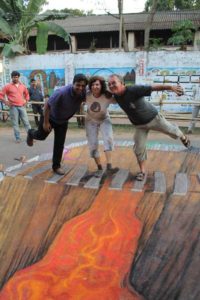 Tracy has been inspired by the attempt of Bhubaneswar to become a child friendly city and will create a huge mural with a 3D illusion showing children at play.
Although street art has become increasingly popular in different cities in India as they try to develop a character and become a matter of pride for citizens, Bhubaneswar is probably the first city that has invited some of the best known 3D street artists in the world to create 3D murals in the city and also in the most visible surfaces of the city, the walls of the flyover that pierces through the city.