India Triumphs The Series And The Fortress At GABBA

What a dramatic day of test cricket! India, a team with all its superstars not playing due to injuries and unavailability, conceding it’s most humiliating loss in Adelaide, pelted with racial slurs, facing immense pressure from Australian team and media, had the odds stacked up against them created history by winning the Brisbane test and conquering the series 2-1. They also beat the mighty Australians in GABBA after 32 long years. Here are a few memorable highlights from today’s game:

Scintillating Shubman:
Shubman Gill played a matured innings after Rohit was out early in the day and built a match winning partnership with Pujara for 114 runs. His class resonated all over GABBA each time he played his strokes on the up against the Aussie attack. He completely looked like a seasoned young veteran. He turned the momentum in India’s favour after hitting Starc for 19 runs in an over. He scored 91 before getting out to Lyon

Iron Man of India:
Pujara proved to world cricket why grit and resilience is important in today’s cricket. He took blow after blow on his head and arms. He was down, battered and bruised, but he didn’t budge with his concentration and stood his ground courageously. With the 56 runs off 211 balls, his slowest half century, the seemingly immovable object Pujara was toppled by the unstoppable force Cummins after the new ball was taken.

Rise of Rishabh Pant:
Pant played yet another magnificent knock in the 4th innings of the test match. He took his time to get set and then took on Lyon and the other bowlers with selective stroke play. His 89* under pressure took India over the line to register the most emphatic win in the history of test cricket. 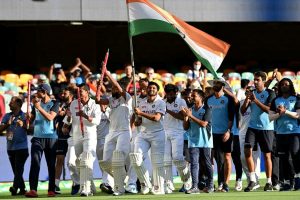 Win for the Ages:
When Rahane played his cameo innings of 24, he struck Lyon over mid wicket for six and that made the strong intent and character of the Indian captain very clear. Another useful contribution was 21 that came from Sundar when he struck consecutive boundaries against Cummins when things seemed tricky for India and shifted the momentum. The winning shot was an off drive by Pant for 4 that seemed like a poetry in motion and the entire team ran into the ground to celebrate the unbelievable victory.

India chased down a mammoth 328 runs, their 3rd highest successful run chase in test cricket and won by 3 wickets. Pant was awarded the man of the match for his amazing knock of 89 runs. Pat Cummins won the Man of the series for taking 21 wickets in 4 matches and showing his big impact and aggression. India rise to the 2nd position in the Test rankings after this victory.

Another 250 Covid patients have recovered in Odisha Today