Bhubaneshwar: The ongoing .FEST (Bhubaneshwar City Festival) continues to offer audiences a one of a kind experience with visitors attending in thousands every day. Day 5 presented a sensational dance production by Odissi exponent – Aruna Mohanty, recipient of the prestigious Padma Shri award and many more to her name. The renowned performer and teacher wowed audiences with poise and elegance in a show performed by 80 dancers. Before the dance, the crowd was treated to a lively performance by young and talented, Ananya Sritam Nanda who warmed up the crowd with a few peppy, foot tapping numbers.
Aruna Mohanty’s performance titled ‘SaptaBarna’ was a spectacular dance and music presentation that symbolized seven vibrant Indian classical dance forms. The performance included a selection of classical, folk and martial dance forms that were presented through an ensemble of drums and live music. 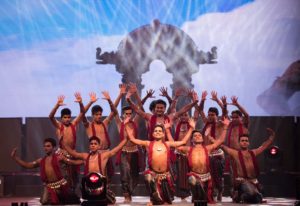 The Manipuri Dance episode showcased the inspiration behind traditional, ritualistic dances and songs that are performed during the Rathayatra festival in Manipur. This was followed by the Odissi and Mohiniattam dance episodes that were a treat to the eyes of the audiences who flocked to see the performance. A classical dance form originating from the state of Andhra Pradesh, Kuchipudi was performed with a special element of skill where the artists danced on the rim of a brass plate, indicating the human possibilities of skill that go beyond the limits. The last three dance performances included Kathak, Contemporary and Talavadya that was concluded with a confluence of bringing alive the spirit of Krishna through all the dance forms.
Today more than 10 inhabitants of Shelter for Urban Homeless (SUH) Ganganagar came to attend the .FEST venue and were happy to be part of the city’s cultural and entertainment show. The SUH authorities brought many of the senior citizens on wheelchairs. “As the city believes in inclusive development, we thought that our inhabitants should also enjoy the Bhubaneswar City Festival and we brought them here,’’ said SUH coordinator Matrumayee.
.FEST continues to appeal to a whopping crowd of people with over 15,000 visitors and tourists in attendance for the festival again today.
On Thursday, 06 December, 2018, .FEST is geared up to captivate the audiences with a performance on Coke Studio’s stage by popular composer and musician, Clinton Cerejo and the Band. The wonder behind the runaway success, ‘Madari,’ is set to wow the crowd with a lineup of songs that is definitely going to get audiences cheering, clapping and singing along with the band.