Bhubaneswar: India is a land of rich history and culture and storytelling has always been an integral part of every person growing up. People in India have grown up listening to stories that have been passed down from generations and has not only taught people important life lessons but also the rich culture that India has to offer. In a one of a kind experience, .FEST is proud to present a story of a lifetime with BhuFeSto – International Storytelling festival.

BhuFesto will be held from 6th to 10th December, 2018 simultaneously at three locations across the city: the Buddha Jayanti Park in Chandrasekharpur, the Indira Gandhi Park and Kharavela Park in Khandagiri from 2.30PM to 7.30PM. It is going to host the best storytellers in the world such as Paula Martin from Argentina, Wangari Grace from Kenya, Dr. Wajuppa Tossa from Thailand, Dongjoo Bang from Korea and Sabrina Anastasia from France. The festival is curated by the Bakul Foundation – a volunteering movement that has been leading efforts at storytelling in Odisha.

Speaking about BhuFeSto, Dr. Krishan Kumar, Commissioner BMC &, Vice-Chairman, Bhubaneswar Development Authority says, ‘’Storytelling is not only a great way to learn about the history of the city but also teaches us important life lessons and builds a sense of togetherness. Bhubaneswar is also host to Odisha Hockey Men’s World Cup 2018 where the dates run parallel to .FEST. As a result, the city is home to a large number of visitors from India and the world for the next two weeks. BhuFeSto is a good medium for people to get to know more about the city through our local storytellers as well as learn about other countries and cultures through our international and national storytellers.’’

One of India’s renowned storytellers, Indian representative at international storytelling festivals and curator of BhuFesTo, Deepa Kiran shared, “It is rare when a government supports a story telling initiative in India. Hence, Bhubaneswar Development Authority’s support to BhuFesTo is great. As a storyteller, I am looking forward to sharing my stories with the people of Bhubaneswar. And the exchange that I am going to have with the people is another thing I am looking forward to.” 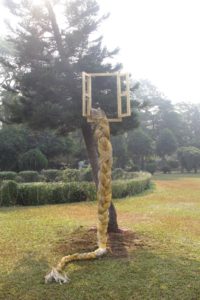 The story telling sessions will be accompanied with performances from the rich storytelling traditions of India. This would include performances like 13th century Urdu oral storytelling form of Dastangoi represented by its most famous practitioner Himanshu Bajpai, the folk Pandavani tradition from Chhattisgarh represented by eminent contemporary performer, Ritu Verma. The famous Manganiyar tribe of folk musicians from Rajasthan, who have given Hindi cinema many popular songs such as Nimbuda Nimbuda, will also be performing for the first time in collaboration with Deepa Kiran where stories will be interwoven with songs. The rich storytelling tradition of Ravana Chhaya (shadow puppetry) from Odisha will be presented by Gauranga Das. Other storytellers in Odia include the cine star, Usasi Mishra, the doyen of theatre, Anant Mahapatra and popular storyteller, Prachi Tara Mishra.