Bhubaneswar: On the fourth day of the ongoing social connect initiative for 22nd Asian Athletics Championships-2017, (AAC-2017), conducted by Bhubaneswar Municipal Corporation and Bhubaneswar Development Authority, Olly – the mascot of the game, had the privilege of being welcomed by a special song and human chains, while touching eight schools and a major mall-cum-multiplex in the city.

Olly’s day started with an early morning visit to the campus of Unit I Boys High School wherein thousands of students from the school as well as from neighbouring Unit I Girls High School and Unit I Upper Primary School had gathered to extend a warm welcome to the mascot of the games. The school band and students welcomed Olly. 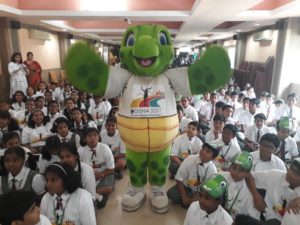 At both the Government High Schools students created special `Rangoli’ near their school gates to welcome the mascot. The District Education Officer spoke on both the functions and inspired students to be a fighter like Olly, which is created following the Olive Ridley sea turtle. The sea turtle comes to the coast of Odisha despite all hurdles to lay eggs and returns after the hatchlings start their sojourn into the endless ocean world.

At CS Pur DAV Public School, the students’ band welcomed the mascot and a human chain created by the students on the occasion to make it more special. There was a virtual competition among students and teachers to take individual and group selfies. The mascot was also taken to the Campus II of DAV Public School CS Pur, where the tiny-tots competed with each other to touch and get close with the mascot.

Olly was given a grand welcome at Mother’s Public School, Unit I, by thousands of students, teachers along with the Principal. A human chain was also formed by the students to welcome Olly. The mascot was taken to the auditorium amidst thunderous applause.

Tomorrow at the 32nd Patha Utsav, the most popular street festival of the city, Olly the mascot of the 22nd AAC-2017, will be a special guest. In this event the man behind Olly, wearing the mascot, educating and entertaining the people in the city, will be felicitated.