Mumbai: Ace directors Vinay Sapru and Radhika Rao’s Sanam Teri Kasam, the greatest love story of our times, with a whopping 7.4 rating on IMDB and is 4.9 on viewers list, celebrates 5 years today.

This movie marked the big Bollywood debut of both Harshvardhan Rane and Mawra Hocane!

The writer-director duo Vinay Sapru and Radhika Rao talk about the completion of 5 years of the film & say, ” After 5 years of Sanam Teri kasam we are really touched..we have done by so many songs so many movies more than 150 songs but the kind of reaction and the kind of love and extreme passion this film generates from audience is really surprising and overwhelming. And not only India but overseas as well this film has garnered immense love. While writing this film- every moment, every character, every dialogue was from our personal life that girl Siru who is Telugu Brahmin she lives like how Radhika’s family is and how things are at her place and boy is something like my background. Also it was an inspiration which came from mythology, Shiv Puran, typically like Indian folk tale where if daughter’s wedding is not blessed by father, its not a successful wedding.”


Talking about casting actress Mawra “While casting of this film we had all the options of casting the existing stars but we thought that the feel of tragic tale of love can only come from people who are absolutely new and fresh. It was really great seeing Muslim girl playing brahmin girl. Who has no idea about brahmin culture of the character that she was portraying and she completly got into the skin of it.”_ 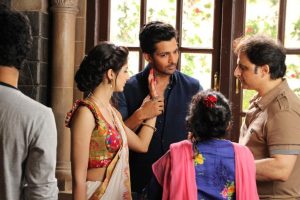 With impeccable direction, a well-written screenplay and powerful performances by the debutant duo, the film tugs at your emotional chords and makes you empathise with Saru and her plight. Their love story is credible and their onscreen chemistry is strong and tangible. The filmmaker’s efforts to make this unusual love story were surely worthwhile.

‘Sanam Teri Kasam’ is an intense love story of two diametrically opposite people; Saraswathy Parthsarthy aka Saru (Mawra Hocane), a Tamilian Brahmin and her wealthy neighbour Inder (Harshwardhan Rane). The movie is a complete package of emotions and love and portrays the courage it takes to be in love.