Dubai:  The World’s Biggest Prabasi Nuakhai Bhetghat was organised by the Paschim Odisha Parivaar of the United Arab Emirates (UAE) at the Auditorium of the Indian Consulate in Dubai, United Arab Emirates on Friday, the 8th of September. A record breaking audience participated in the function, clearly making it the largest Nuakhai Bhetghat ever organised on foreign soil. 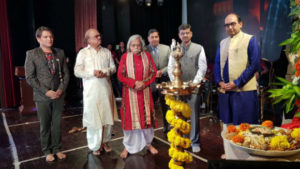 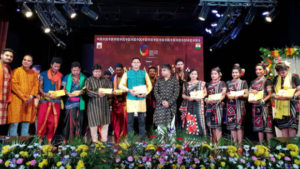 Shri Saswat Joshi and Shri Atal Bihari Panda were Special Guests.The event began at around 11am in the morning with the lighting of the inaugural lamp by Shri Vipul and other guests. Prayers and the ‘Nua Dhan’ (new rice of the season) were offered to Goddess Samaleswari by Shri Vipul followed by the other guests. All this was accompanied by an electrifying Samalei Bandana which was sung along with the mesmerising beats of the Dhol, Nissan and Jhanj. The entire atmosphere became other worldly and surreal. The ‘Nua Dhan’ was specially flown in from Western Odisha (Kuchinda in Sambalpur District) and ‘Prasad’ was served in ‘Sargi Patar Dana’ (bowls made out of Sal tree leaves) which were also flown in from Kuchinda. These touches made the celebrations really authentic and evoked a lot of appreciation from the crowd.  Shri Vipul started his inaugural speech with a ‘Nuakhai Juhaar’ to the audience. He said that he was very happy to be celebrating Nuakhai with the Prabasi Odias of UAE. He recalled his own association with Western Odisha when he talked about working in the Rourkela Steel Plant for a few months, at the beginning of his career. The inauguration set off a day long cultural extravaganza. There were fantastic performances by resident Odias of UAE and their children. Sambalpuri dances by kids performed on popular Sambalpuri songs stole the show. 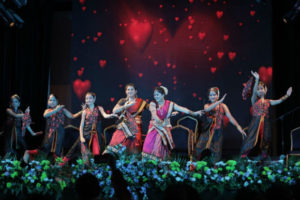 One of the highlights of the kids’ performances was the moment when a bunch of kids performing on the hit song from Shri Atal Bihari Panda’s movie Aadim Vichar – ‘Likri Jhikri’, dragged him onto the stage and made him dance with them. The sight of Shri Panda dancing with the kids was indeed a magical moment and the entire audience cheered them. Shri Panda who is known to be ‘an 87 year old young man’ regaled the crowd with his mastery over the Sambalpuri language. According him ‘age is just a number’ and that he is still raring to go. The infectious energy displayed by him during his speech and when he danced with the kids, impressed the audience to no end. Shri Panda was very impressed with the scale of Nuakhai Bhetghat UAE 2017 celebrations of the Prabasi Paschim Odias. He also was very happy that his first foreign trip was facilitated to Dubai to be a part of the Nuakhai Celebrations. Internationally acclaimed Sambalpuri and Odissi dancer, Shri Saswat Joshi literally set the stage on fire with his dance moves. He danced to the superhits Rangabati and Rasarkeli Bo among many other songs. Saswat’s popularity and connect with the audience was very visible. The entire hall stood was on its feet when Saswat came on stage. He engaged very well with the crowd and called them on stage to perform with him. Odia families from Abu Dhabi, the capital of the UAE presented a dance drama in Sambalpuri, based on Shri Saswat’s life. His rise as a performer was beautifully captured by them in a dance-drama format. Shri Joshi became emotional on witnessing this rendition of his life story and said that this was a very special moment for him. He thanked the performers for their warm gesture from the bottom of his heart.The 12 Member Troupe from Sambalpur Kala Parishad won over the audience with the sheer power of their talent. Of particular interest was the ‘Dhap’ dance which is performed by an ancient Adivasi tribe of Western Orissa, the ‘Kandhas’.  The dance is an integral part of all major festivals, especially the Nuakhai festival. Other dances/items performed were ‘Mayelajada, Nachnia & Bajnia’. Sounds using ‘Panchavadya’ – Dhol, Nisan, Jhanj, Tasha & Muhuri created a magical atmosphere. The beautiful Sambalpuri attires of the troupe won a lot of appreciation. This was Sambalpur Kala Parishad’s first foreign trip in the last 24 years. The last time they went overseas was in the year 1993 when they performed in Indonesia. This troupe was led by Shri Surya Prakash Guru who is himself a music director. Apart from being the World’s biggest Prabasi Nuakhai Bhetghat, the celebrations had 3 significant milestones:1. ‘Saptapar’ – The world’s First Multi Ethnic Exclusive Sambalpuri Fashion Show (outside India) was a big hit. Models from different countries like Russia, China, Thailand, Morocco etc. walked the ramp along with local Odia talents. ‘Saptapar’ showcased a few designs of designer Sujit Meher. It was sponsored by ‘Wardrobe by Arpita’, a leading Indo-Western boutique, based in Sambalpur. All the models wore clothes from ‘Wardrobe by Arpita’. This boutique specialises in designer Sambalpuri wear (among other things). 2. ‘Nuakhai Bhetghat UAE 2017 Calendar’ – A unique calendar was released on the occasion of Nuakhai Bhetghat UAE 2017. 12 months of the calendar had models from 12 different countries, wearing Sambalpuri Handlooms and posing against different landmarks of the UAE like the tallest building in the world – Burj Khalifa, the iconic 7 Star Hotel – Burj Al Arab etc. Models were different countries like France, Brazil, Russia, Spain, Kenya etc.  This project is a humble attempt to showcase the richness of the the ‘Magical Sambalpuri Weaves’. This is probably for the first time in the World that an exclusive Sambalpuri Calendar conceived and shot entirely outside India involving people of 12 different nationalities has taken shape. 3. World Premiere of Shri Saswat Joshi’s music video ‘Sare Jahan se Acha’, which is collaboration with Sare Ga Ma Pa singing sensation Barnali Hota happened at Nuakhai Bhetghat UAE 2017. Produced by ‘Amara Muzik’, The CD was released by Honourable Consul General Shri Vipul. This is Shri Saswat’s tribute towards India’s 70 years of freedom.
Nuakhai celebrations are known for their food and Nuakhai Bhetghat UAE 2017 was no exception. A sumptuous spread of mouth-watering Odia and Western Odisha delicacies were on offer. ‘Ambila’ was painstakingly prepared by the Odia ladies themselves.
All the people who attended the celebrations were given a packet of traditional sweets which were specially flown in from Sambalpur.  Aarisa, Dantri Khaja, Khira Gajaa, Pheni & Bundi Khaja were specially made for Nuakhai Bhetghat UAE 2017 at the famous Rabi Hotel of Nandapara, Sambalpur.Overall, Nuakhai Bhetghat UAE 2017 was a historic and humongous success. This fourth edition of Nuakhai Bhetghat UAE was indeed a path breaking function and it’s success has resonated across the globe as the World’s Biggest Prabasi Nuakhai Bhetghat.  According to the organisers, the most satisfying part is the fact that the best of Sambalpuri Culture got exposed to so many people, not only from Odisha and India but also from different nationalities and that too on a world platform. The richness of the best that the region has to offer was beautifully showcased to the entire World!

Odisha Govt revenue generation registered overall growth of over 9%, spending up 36 per cent