Pelosi on Tuesday night greeted Taiwanese officials including Foreign Minister Joseph Wu on the tarmac, where she posed for photos. Her congressional delegation plans to meet President Tsai Ing-wen on Wednesday morning and for lunch, the Taiwan leader’s office said in a statement. 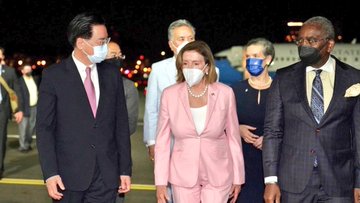 Pelosi said in a statement that her visit “in no way contradicts longstanding United States policy” and that America “continues to oppose unilateral efforts to change the status quo.”

China in response condemned the visit and announced it would conduct missile tests starting on Tuesday night. Beijing also announced military drills in different areas surrounding the main island of Taiwan from Aug. 4 to Aug. 7.