US Ambassador to India Kenneth I. Juster joins Ekamra Walks

Bhubaneswar: US Ambassador to India Kenneth I. Juster came on a special Ekamra Walks and walked from the 10th Century Mukteswar to 11th Century Lingaraj Temple.
The Ambassador, accompanied by Consul General Katherine B. Hadda from Hyderabad and other Embassy and Consular officials, started the heritage tour around 9 am and continued till 10.20 am covering a distance of more than 1 km.
The US Ambassador showed keen interest in knowing the architectural style and the unique Kalingan way of temple building and especially, the beautifully designed arch of the Mukteswar Temple. After that he went to 7th Century Parasurameswar Temple, which is also a masterpiece in temple building craftsmanship of the Odishan traditional architects or “sthapathis’’ as they were referred to in the ancient text.
After Parasurameswar, the Ambassador went through the Kotitirtha Lane and saw Swarnajaleswar and Kotitirtheswar Temples and reached the holy Bindusagar Lake and was fascinated by the view of the water body as the morning sunlight and the blue sky created a magnificent view. He also clicked photographs with the priests performing traditional rites.
The 12th Century Anantavasudeva Temple with its sought-after temple kitchen also attracted the attention of the US representative to India and he asked guide Sophia about the temple kitchen and how the cooks are managing to deliver delicious food centuries after centuries with the traditional cooking style with earthen pots.
After Anantavasudeva Temple, the US Ambassador had a look at the historic Doodhwala “dharamsala,’’ meant to accommodate the budget pilgrims in the Old City, saw the Gourishankar Temple and went to the Curzon Mandap near the 11th Century shrine, famous for the worship of Lord Lingaraj, the presiding deity of Ekamra Kshetra. 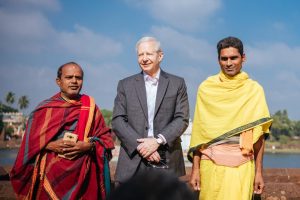 Throughout the heritage walk the Envoy tried to capture the memories with his own camera and enjoyed the time with people, places, lanes and passages of Old Bhubaneswar.
Vice-Chairman Bhubaneswar Development Authority and Municipal Commissioner Dr. Krishan Kumar thanked the US Envoy, Kenneth I. Juster, for joining Ekamra Walks, the first guided heritage tour of the city, which has become a major tourist attraction in recent times.
About Ekamra Walks
In order to foster Bhubaneswar as a tourist destination and promote it as a heritage city, several initiatives have been taken by the city administration with plenty of holistic activities gearing-up on the list. One of such pursuits is the weekly guided heritage walks covering destinations of great historical and cultural significance. These heritage trails, currently trending, as Ekamra Walks has made more than 9,000 heritage lovers, from and beyond the city, explore the undiscovered treasure of Bhubaneswar.
While the Heritage Walk starts every Sunday at 6.30am from Mukteswar Temple and ends at Ekamra Van, the medicinal plant garden, the Jain Trails happens every Saturday at 6.30am from Udayagiri Caves and ends at Khandagiri. The caves stand as one of the earliest groups of Jain rock-cut shelters, commanding a unique position in the glorious pages of Odishan history.
The Museum Walk, which happens every Sunday at 3.30 pm happens at Kala Bhoomi, the newly established museum of art and craft, is a space that connects people from across the world with the handicrafts and handlooms of Odisha. The museum celebrates the craftsmanship of Odisha’s artisans by putting on display their breath-taking masterpieces.
The newly-added Streets of Ekamra happens every Saturday at 3.30pm and the meeting point is Emar Matha, near Bindusagar. Rare of its kind, the Streets of Ekamra shelter stories that have been told over and over for generations. The walkers explore the temple neighbourhood and come across intangible histories about people and their palates of the Old City!