Two prominent international hockey players from Odisha, Birendra Lakra and Amit Rohidas, have found place in the national men’s team for the International Hockey Federation (FIH) Series Finals at Kalinga Stadium here, beginning June 6. The Hockey India announced the 18-member squad for the Olympic qualifier event. A trusted defender, Birendra has been named as the vice-captain of the team. Besides, Hockey India has pinned hope on Amit, who is also a defender.

Odisha Chief Minister Naveen Patnaik and Hockey legend Dilip Tirkey congratulated the players from the state for making it to the 18-member India squad for the tournament.The CM took to his Twitter handle to extend his best wishes to the  players.

Congratulate hockey players from #Odisha, vice-captain Birendra Lakra & Amit Rohidas for making it to the 18-member squad of Indian Men’s Hockey Team for the #FIHSeriesFinals to be played at #KalingaStadium in #Bhubaneswar from June 6-15. Best wishes to the team. #Odisha2019 pic.twitter.com/DDf7pscAST

I am very much delighted to know Birendra Lakra has been named as the vice captain of the squad announced by @TheHockeyIndia .#FIHSeriesFinals #RoadToTokyo #Odisha2019

The Indian team will be led by Manpreet Singh. Experienced goalkeeper P.R. Sreejesh and Krishan B. Pathak will defend India’s goalpost while Harmanpreet Singh, Birendra Lakra, Surender Kumar, Varun Kumar, Amit Rohidas and Gurinder Singh will add to India’s might in the backline. 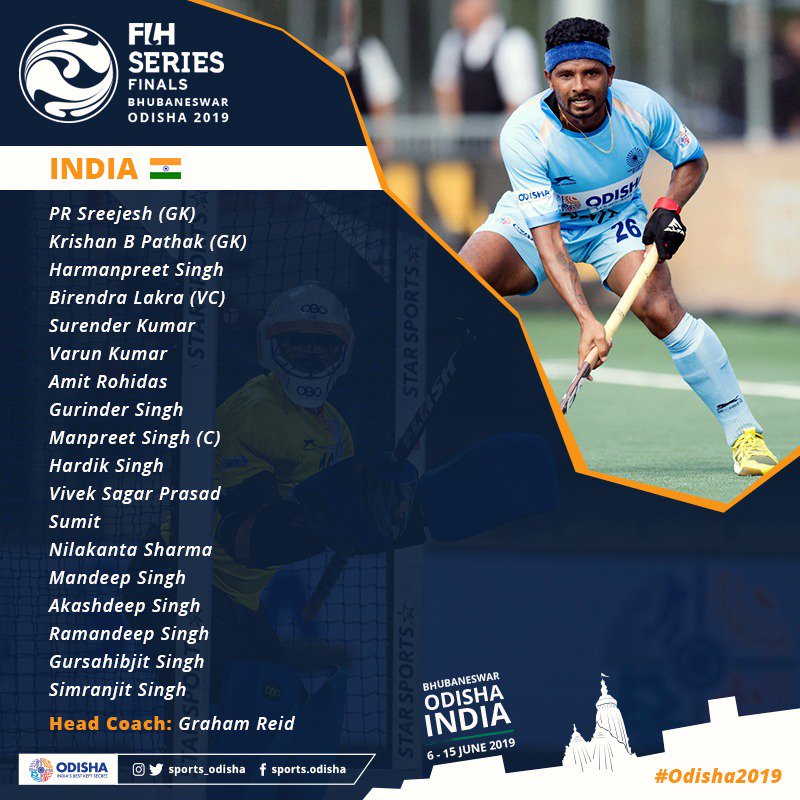 A notable addition in the squad is that of forward Ramandeep Singh who returns having recovered from a knee injury that kept him out of action for nine months. Singh last wore the India colours at the Champions Trophy in Breda last year. He had since been out of action due to a knee injury.

Speaking about India’s preparedness for the tournament, coach Graham Reid said: “Our focus for the tournament will be consistency of performance. To achieve this will we need to respect every opposition and give our 100 per cent every quarter, each half, each game. Our goal will be to be the best team we can be.

“We have selected a well-balanced group including Ramandeep Singh, who is returning from injury and Varun Kumar who was rested for the Australian tour. Sumit and Amit Rohidas too return to bolster our defensive capabilities and our Penalty Corner. Simranjeet also returns to add some flexibility and strike power to the forward-line,” stated Reid about the team composition.”

He further said that the team’s emphasis at the moment is on circle entries, finishing, tight marking and tackling.

“The Australian tour made us very aware of the level we need to play at to compete with the best teams of the world and we need to aim for that each time we train and each time we play. We are spending a lot of time at the moment on our circle entries, our finishing, tight marking and tackling and we want to see improvements in these areas. PCs are also important and we have chosen three drag flickers to use during the tournament,” said Reid.

The event will see India grouped in Pool A along with Russia, Poland and Uzbekistan while 18th Asian Games Gold Medalist Japan, Mexico, the US and South Africa are grouped in Pool B. 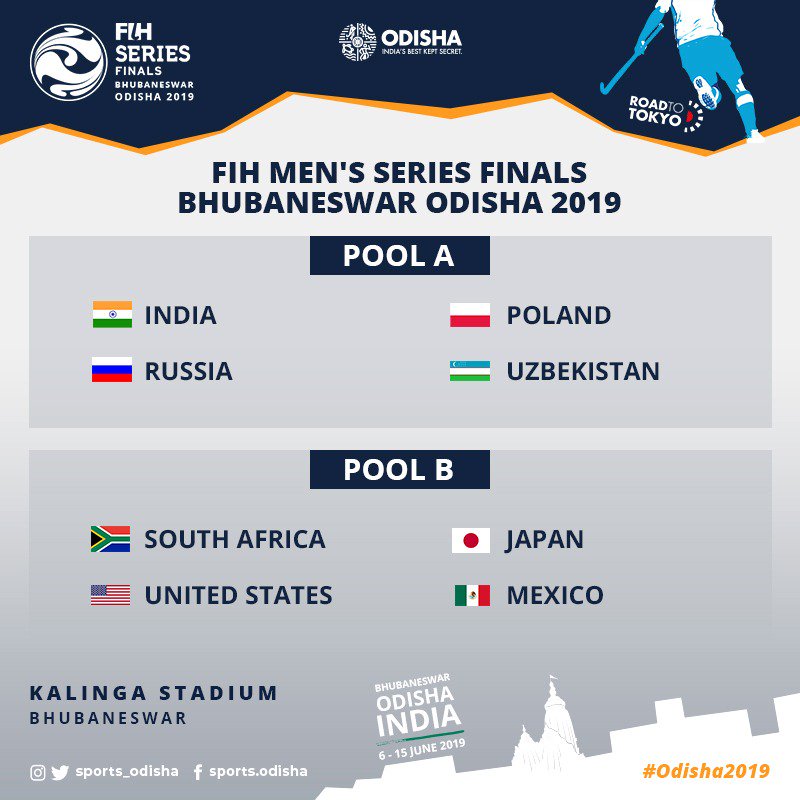 India will begin their campaign on June 6 against Russia and will be aiming to finish on the top in order to make it for the Olympic Qualifying event to be held later this year. 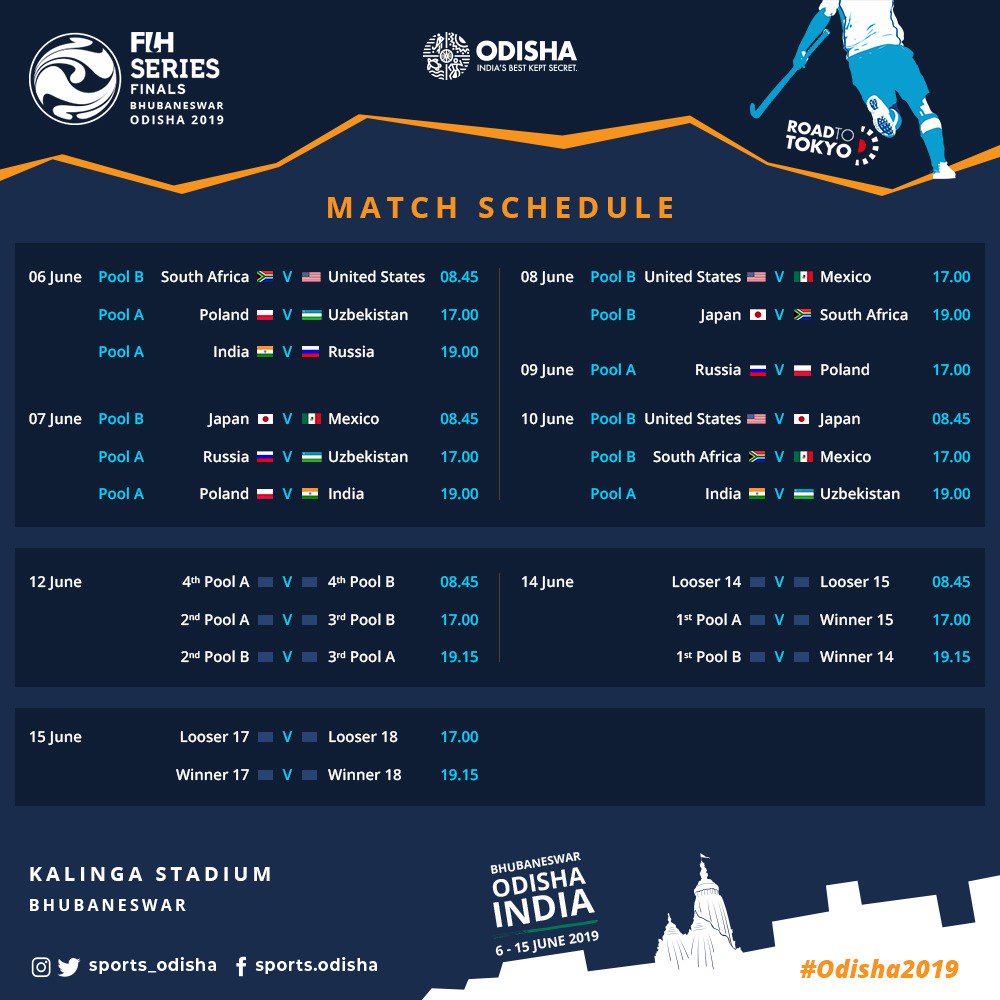