“Literature is limitless, exactly as time has no boundaries. It has never binded literaturers to perform in the minds,” says Amaresh Pattnaik, the renowned writer and the member of National Sahitya Akademi who had graced the festival by inaugurating on the first day.

He had congratulated the entire organising team for coming up with such a progressive step of conducting a literature festival in Kandhamal which remains aloof of the outer world.

Dr. Achyuta Samanta, M.P Kandhamal inaugurated and honoured the second day of Kandhamal Literary Festival. Delivering greetings to the land, he said, “I am thankful to the entire organisation and especially Rashmi Ranjan Parida and his dream for putting up the effort to bring Kandhamal’s literary heritage on the global map. I pay all my support to them and I do look forward to take this vision on an international level in near future.”

The event had kick-started with the welcome address by Debashish Samantaray, Co-founder, Kalinga Literary Festival.  “The pillar of Odisha’s literary tomb stands firm on the base of the foundation laid by its tribal belt,” says Debashish Samantaray in his welcome note.

Rashmi Ranjan Parida, the Founder and Director of Kalinga Literary Festival expressed, “It is a dream we all had nurtured and now that it is growing, all our efforts and dedication are entirely into making Kandhamal’s tribal literary heritage of global.”

Various sessions bringing Kandhamal’s literature and culture as well as touch and influence of contemporary era were put up as- “Kandhamal: How Far And How Near From Odia Literature”, “The Voice Of Marginal Literature”, “Kandhamal: The Experience: Past, Present, and Future etc. followed by local poetry recitations and dance demonstrations of Odissi and Dhangada-Dhangadi by the disciples of Nataraj Kala Kendra. 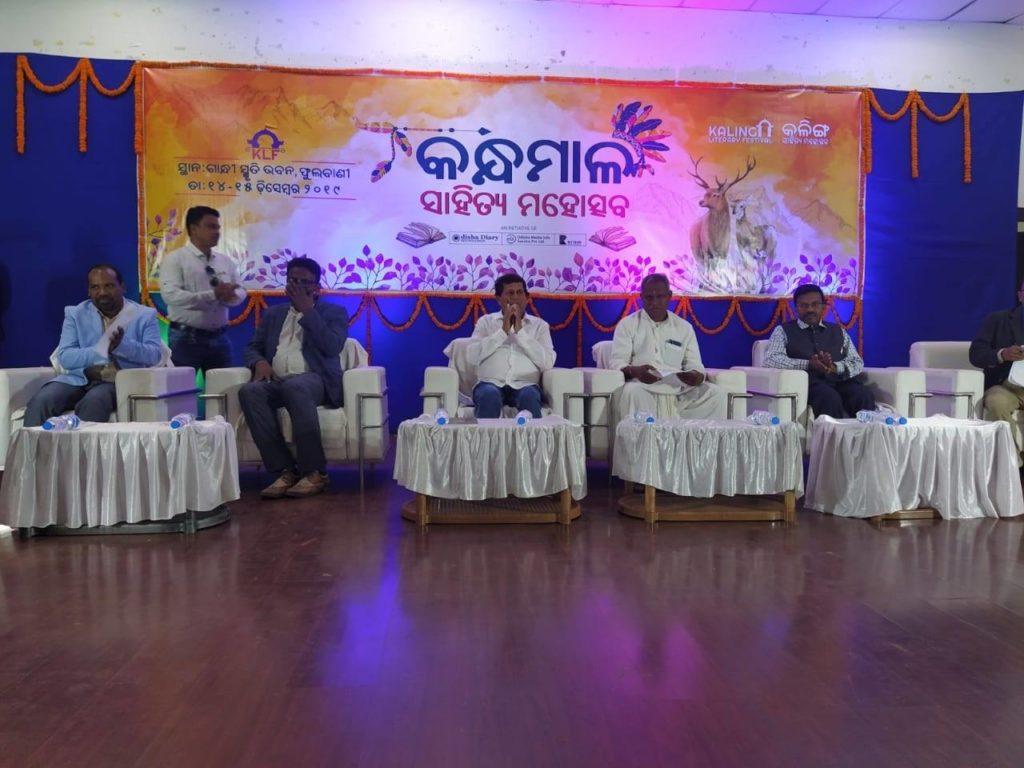 Literary figures like Kedar Mishra, Jyoti Nanda, Madan Mohan Mohapatra, Amaresh Pattnaik, Iswar Chandra Naik, Amaresh Biswal had joined. The event was hosted by Sarat Acharya. Sitansu Mohapatra, Co-convener of the organization gave the vote of thanks to all the dignitaries and denizens of Kandhamal by saying, “The initiation has been done a year ago, now there is no stopping point. The world which was aloof of what Kandhamal has for them, has gradually started knowing about it. KLF team is thankful for everyone’s participation.”

Restoring the belief in humankind, an independent local organisation of Phulbani, ‘Team Humanity’ had voluntarily partnered with Kandhamal Literary Festival.

In the concluding hours of the successful event, team Kalinga Literary Festival announced the dates for the 3rd Kandhamal Literary Festival which will be 19th and 20th of December, 2020. Taking all the selfless support, service, and affection it promises to make the upcoming edition even larger than life and a global one.

IMD : Another low-pressure area is likely to form over the North-west Bay of Bengal…