Speaking to media persons soon after the meeting, Patnaik said, “We discussed matters of national interest. We will take the talks forward. We also discussed the Polavaram issue and women’s reservation in Parliament.”

“We discussed several things including friendship of like-minded parties. We’ve not thought that (Parliament elections) far. He (KCR) came to Odisha to offer thanks to Lord Jagannath for his tremendous victory,” Patnaik added.

In his media reactions, The Telangana CM said: “We need to talk to more people across the nation. There’s a dire need for the unification of regional parties as there’s a strong need for an alternative to Congress and BJP.”

The country needs a change for which dialogue has begun, we’re doing our part but nothing concrete has emerged. We’ve just begun the dialogue; we will meet again to discuss how to take things forward,” KCR added.

According to reports, the Telangana 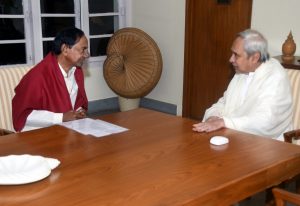 CM along with this family will visit the Sun Temple in Konark and Srimandir in Puri and return to Bhubaneswar tomorrow.

On Monday, the Telangana Rashtra Samithi (TRS) chief will call on West Bengal Chief Minister Mamata Banerjee in Kolkata. After a meeting with Banerjee, KCR will visit Kalimata Temple and leave for New Delhi.