Bhubaneswar: In a unique initiative, Bhubaneswar Smart City Limited (BSCL) under its socially smart city initiative has started paintings murals at Telugu Basti in Saheed Nagar under BTCD area to spread the message of cleanliness and gender equity. While the Smart City Proposal (SCP) has already proposed the child-friendly city concept, the two new aspects would add to the BTCD area’s changing profiles of slums to become smart and healthy.
Activating unused space at the entrance of Telugu Basti, Saheed Nagar, BSCL under Socially Smart Bhubaneswar Initiative created murals in collaboration with city based artists and art organizations. The mural will also have social awareness messages added to it in coming days
Similar art-based initiative has also been started at Shanti Nagar in Kharvel Nagar area, wherein murals have been created around a newly formed playground which was earlier an open defecation site.
Peer leaders and young children of Shanti Nagar Basti had cleaned up a 4,000 square feet of area which was earlier used as open defecation site. They had cleaned up the space and are now using it for the purpose of playing. Taking the process further, BSCL took up the initiative to paint the walls of the open space and entrance to the slum with paintings to make it look clean, beautiful and child-friendly. Also messages of social importance are put at relevant point. Along with it the day care centre being managed by Ruchika Organisation for small children is being made child friendly. This would help to create interest towards education amongst the children.
It can be mentioned here that BSCL with UNFPA has taken up the Socially Smart Bhubaneswar Initiative in the BTCD slums to empower adolescent girls, women and students in order to create better society for the Smart City goal. In future senior citizens will be incorporated into the programme so that they would be benefitted from the Socially Smart Initiative.
Similar initiative had been taken up in the Telgu Basti where the slum entrance point is being painted to make it look beautiful. Also social messages on importance of cleanliness, creating awareness on gender equity and society sans gender-based violence are being put up. Information with regard to helpline numbers will also be added to the space allocated on the painted walls for the public.
BSCL General Manager Operations Bijay Kumar Singh said “the beautiful paintings on the slums will not only provide a new look to the BTCD slums, but also provide awareness to gender-based issues and cleanliness. We are hopeful that the slum residents would be greatly helped by these initiatives.’’ 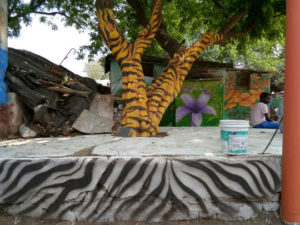 In Shanti Nagar, in addition the peer leaders are taking initiative to go in for plantation awareness and the wall paintings will incorporate these messages.
The slum sites have not only become one of the most important and accessible spaces for the youth, especially girls, where many events are being organised by them. One can also see young girls playing in these spaces very often.
Recently the peer leaders of the area took initiative to organise a program on the occasion of World Water Day where youths from other areas also participated. Also in the coming weeks the youths are planning to orgnaise a cricket match in the space.