After giving hits like ‘Bulleya’, ‘Manma Emotion’, ‘Allah Duhai’, ‘Ole Ole’, singer Amit Mishra is all set to surprise his listeners with his upcoming track ‘Aashiq Tera’ with Times Music label and composer duo Kaushik-Guddu. Talking about the song and the journey, Amit informs, “I have worked with Kaushik da as a teammate on many projects and regard him as my senior. He is an immensely talented person. So when I got a call from him, he told me about this song and I recorded it. That was when Covid and restrictions were at their peak. We all were working from our respective places at proper studios.

Since it is a very powerful song, we had to submit lots of drafts, dubbed it in 4-5 rounds. Due to the pandemic, all the work were happening remotely. We were not performing in front of the composers as we used to. Lyricist Kaushal Kishore has penned it brilliantly, and the song has come out well with Kaushik-Guddu’s composition and also with music production by Kaushik da and Zia.

Shadab Rayeen has brilliantly done the mastering of the track. Abhishek Sortey as the assistant engineer and music assistant to Kaushik-Guddu Shiladitya Sarkar has been keenly associated with the making of the song. Shiladitya is quite dynamic.
Prateek Gupta has managed the whole project.”

He further tells about the video that features popular tele actor Vivek Dahiya and actress Sidhika Sharma. “Vivek Dahiya and Sidhika Sharma are the fitting faces of the song. It has been picturised on them beautifully. The producers of the song are Shiva Maheshwari and Hashim Bachooali. Arif Khan has directed the video. He is quite popular in the music video space and has directed videos like ‘Tera Intezaar’, ‘Tu Mera Nahi’. Anchal Sharma is the associate director. The song has been made in association with Omnipresent Pictures.”

However, Amit mentions that it is his second venture with Times Music.
“This is my second project with Times Music. Earlier I had done ‘Fakira’ which was composed by B Praak. That was also a very good song with a wonderful team. Anurag Psychaea took me on board for that song.”

One of the favourite names in every playlist, Amit has completed nine years in the Indian music industry. He says, “It been nine years I am in this industry, but times have flown. I have to work a lot, deliver more and more great songs to our audience. My parents, fans, and audience mean everything to me. I believe what I work and deliver, their reaction justifies the worth. Precisely, in all these years, I have learnt and I want to earn that pride of my audience. Years are in numbers but experience means a lot.”

He further narrates his comradery with Kaushik. He says, “While I was working on ‘Bulleya’, it was Kaushik da and Ashwin Kulkarni who recorded me. I have spent a good amount of time with Kaushik da. I wish we could have dubbed this song having each other’s presence, but I am glad the song is coming out great. He is an extremely talented person and a multitasker of excellence. It is an honour to work with him for Times Music.” 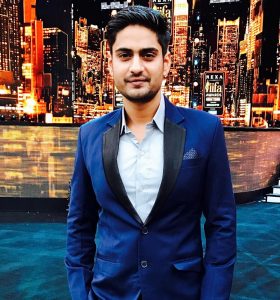 Every artist has a performer within himself. In the post-pandemic time, Amit mentions his nostalgia for live performances. “My performances always bring me nostalgia. My one such performance with Ash King brings me up a story. I met him in West Bengal where we both were performing on the same day at two different places. That time ‘Manma Emotion’ was a chartbuster, and Bulleya had just released. Ash King asked me to join his concert after my gig. These stories are inspirational and nostalgic. Humility and kindness make a man legend. Having said that, I feel my training with Pritam da’s team, my Guru’s like Pt. Vinod Prasad Ji and my family’s supportive gesture have contributed to my progress in performances. That also contributes to my work with my team AM Live. My management team ensures timely rehearsals, checking the availability and facilities for rehearsals before any gig. Even during Covid, they ensured proper guidance and good live performances. Pritam da, Shalmali Kholgade, Antara Mitra, Nakash Aziz, Sreeram Chandra, are all such great artists and has worked with them has contributed to developing me as an artist.

Yes, we have started performing on stage but it is not like older times. But I guess whenever Covid norms led by govt will get any relaxation according to convenience, things will gradually get back to normalcy. I never feel that I am performing for a day. I take it as a lifetime experience for me and for the people who come to my gig. I am missing stage performances, and I hope,” he says.

Besides Bollywood, having sung in multiple and genres, Amit says that music stands first for him irrespective of languages and genres. He says, “If I understand music, I believe I win these factors as well. Our India stands ‘Unity In Diversity’. So I learn from each project I take up, be it in Bangla, Telugu, Marathi or any other language. This makes me understand the nuances of our languages after the deliverance of the song. Recently, I have done some bilingual projects in Punjabi which had many factors of pronunciations and all. Every singer should try and sing in multiple languages because it gives a vast experience and learning. Every new language carries a new and different musical frame. And when it comes to genres, I remember I had done a song for Chirantan Bhatt. I had never sung a song in the pathos genre before, but I learnt some great technicalities while dubbing it. In the Bollywood style of singing, I guess I was directed accordingly to the way I sing. But production-wise it had trance, trap, hip-hop which is brilliant. Be it singing for Varun Dhawan, Ranbir Kapoor, Saif Ali Khan, I take every opportunity as an honour. ‘Ole Ole’ is really special because I got a chance to work with Abhijeet Bhattacharya Saab. It won’t be wrong if I say that the recreation became a hit due to Abhijeet Bhattacharya and Tanishk Bagchi.”