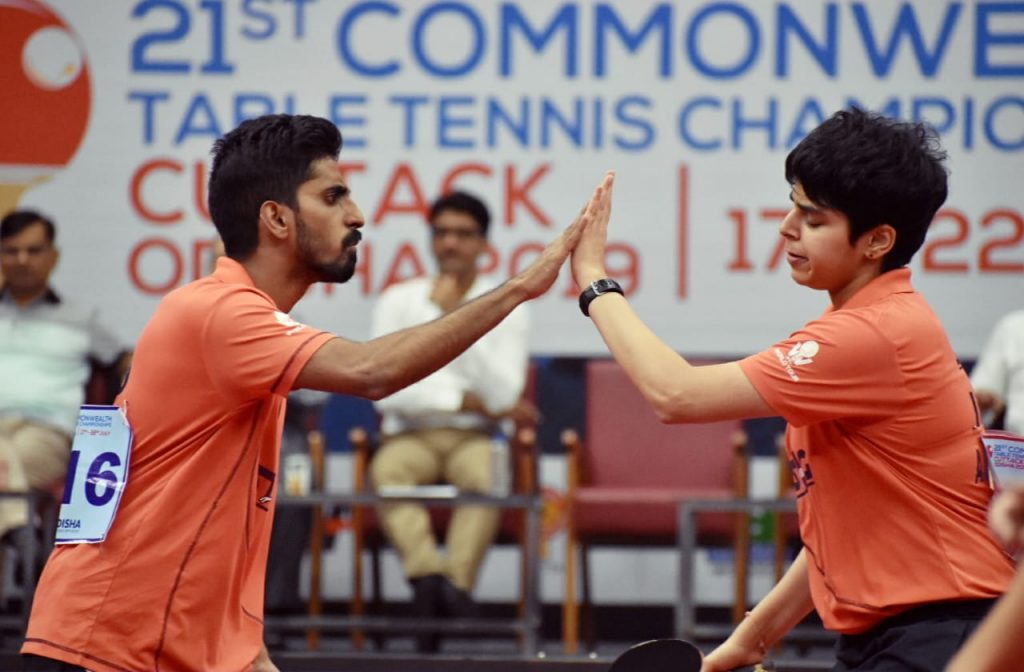 Cuttack, July 21: India added another golden chapter to the 21st Commonwealth Table Tennis Championships when its mixed doubles pair of G. Sathiyan and Archana Kamath defeated Singapore’s Peng Yu En Koen–Goi Rui Xuan 3-0 in the final at the Jawaharlal Nehru Indoor Stadium here today.
https://twitter.com/sports_odisha/status/1152991057816088576
https://twitter.com/sathiyantt/status/1152963653211058177
The gold count, on the penultimate day of the championships, stands at three.
This had, in a way, avenged the earlier loss by the same Singaporean pair of A. Sharath Kamal and Sreeja Akula in the semifinal—the only gold missing from his closet—as well as the shock defeat of Sharath in men singles quarterfinal by Peng.
https://twitter.com/Media_SAI/status/1152953259931234309
The Indian pair was on top in the final as they piled on the agony of their rivals, particularly on a tired Peng who could not cope with the pressure applied by the top-seeded duo who simply decimated them.
But second-seeded Sharath Kamal squandered three match points and then the quarterfinal match, shattering his men singles medal hope. Though Sharath failed to go past the semifinals in mixed doubles, he would definitely rue the loss of the single to the younger legs of Peng which played a major role in the left-hander snatching victory from the jaws of defeat as he not only survived 1-3 deficits but also seized the advantage in the decider to enter the semifinals.
https://twitter.com/sports_odisha/status/1152942433769930752
The other Indians that made grade included top-seeded G. Sathiyan, who beat Nigerian Bode Abiodun 4-0 and Harmeet Desai who accounted for fellow Indian Sushmit Sriram 4-1. Sanil Shetty joined Sharath when he went down to England’s Thomas Jarvis 1-4.
Earlier, top-seeded Ho Tin-Tin of England disposed of unseeded Archana Kamath, the reigning national champion, 4-1 to enter the women singles semifinals. But second-seeded Madhurika Patkar and fourth seed Ayhika Mukerjee easily followed the English woman in the last-four stages while in a marathon battle, Sreeja Akula defeated Sutirtha Mukherjee 4-2 even as Madhurika downed Krittiwika Sinha Roy 4-1 and Ayhika beat Mousumi Paul in straight games.
Archana, who played well until this point, was unable to find her feet against the attacking Ho who cashed in on several unforced errors committed by the Indian. After losing the first game, the Bengaluru girl came back to level 1-1 but lost her rhythm from there to lose tamely.
Madhurika had a good measure of Krittwika, the national runner-up and despite losing a game she punished her rival when the opportunities presented themselves. Indeed, Krittiwika had a slight advantage in the fourth game but lost it 10-12 and then the steam.  However, for Ayhika it was rather easy as Mousumi could not cope with her rival’s quick returns and excellent placements.
Two extended games must have sapped the energy of both Sreeja and Sutirtha but the former held her nerves despite squandering five match-points to romp home winners.
The scratch pair of Sharath Kamal and Sreeja Akula, in the absence of Manika Batra, had little problem up to the stage of semifinals. But once there, the mismatch became more palpable when the Indian duo took on Singapore’s Yu En Koen Pang and Rui Xuan Goi, who play together more regularly.
More often than not, Sharath had to plug the gaps that became a yawn as the match progress and Singaporeans made most of the situation. Despite taking the first game, the Indian duo came back strongly to take the next two and lead 2-1. But the Indians lost their way with Pang and Goi combining well to level the score and then complete the decider in double quick time, the Indian duo managing just four points.
In contrast, Sathiyan and Archana hardly dropped a sweat when they beat the other Indian pair of Harmeet Desai and Ayhika Mukherjee 3-0. In fact, the first two games got over in less than 10 minutes. Though Harmeet and Ayhika resisted a bit longer in the third but could not stop Sathiyan and Archana from progressing into the final.
In men doubles, two Indian pairs—Sharath and Sathiyan and Anthony Amalraj and Manav Thakkar—made it to the semifinals while the two other pairs that will challenge the Indian domination will be Pang Yu En and Chua Shao Han from Singapore and the English duo of Samuel Walker and Thomas Jarvis, respectively, tomorrow.
In women doubts, Pooja Sahasrabudhe and Krittiwika Singha Roy, Sreeja Akula and Mousumi Paul and Sutirtha Mukherjee and Ayhika Mukherjee entered the semifinal while the fourth pair, top-seeded Madhurika Patkar and Archana Kamath went down to Singapore’s Goi Rui Xuan and Won Xin Ru 2-3 (5-11, 8-11, 11-8, 11-7, 9-11) and missed the medal bus.
The Results: Final: G. Sathiyan-Archana Kamath bt Peng Yu En Koen–Goi Rui Xuan (SGP) 11-1, 11-7, 11-4; Semifinals: G. Sathiyan-Archana Kamath bt Harmeet Desai-Ayhika Mukherjee 11-2, 11-2, 11-9; Peng Yu En Koen–Goi Rui Xuan (SGP) bt Sharath Kamal-Sreeja Akula (IND) 13-11, 8-11, 6-11 11-8, 11-4.
Men Singles: Quarterfinals: G Sathiyan bt Bode Abiodun (NGR) 11-7, 11-8, 11-8, 11-6; Thomas Jarvis (Eng) bt Sanil Shetty 11-5, 11-8, 8-11, 13-11, 12-10; Harmeet Desai bt Sushmit Sriram 11-4, 11-8, 6-11, 11-7, 11-8; Pang Yu En Koen (SGP) bt Sharath Kamal 7-11, 9-11, 11-8, 4-11, 11-9, 11-7, 12-10.
Women Singles: Quarterfinals: Ho Tin-Tin (Eng) bt Archana Kamath 11-9, 7-11, 11-5, 11-3, 11-6; Ayhika Mukherjee bt Mousumi Paul 11-6, 11-6, 11-2, 11-8; Sreeja Akula bt Sutirtha Mukherjee 11-5, 11-6, 11-9, 17-19, 6-11, 17-15; Madhurika Patkar bt Krittiwika Sinha Roy 11-4, 9-11, 11-8, 12-10, 11-9
odishaTable Tennis
Share

ISL club Delhi Dynamos to shift base to Bhubaneswar