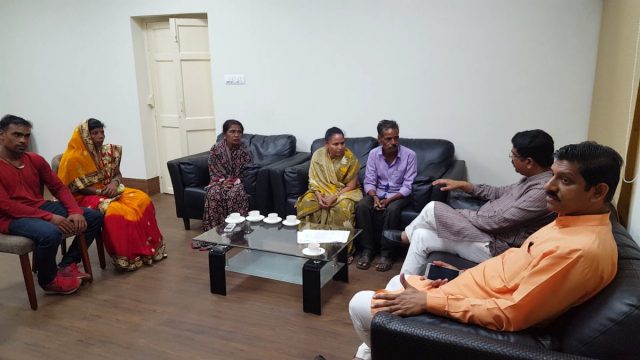 Bhubaneswar: Union Petroleum and Natural Gas Minister Dharmendra Pradhan meet family members of freedom fighter Laxmi Panda, says Babula Panda being traced is good news.
On the other hand Police prevents BJP team led by Samir Dey from meeting Babula Panda citing security reasons.
It should be noted that after 11 days of mysterious disappearance from the city railway station, Babula was found lying in a drain in Mancheswar area of the city on Thursday.

As per sources, a special team of Mancheswar police traced Babula where he was lying in pain. After his rescue, when he complained of severe pain in his pelvic region, the cops soon admitted to Hi-Tech Medical College and Hospital here, near to the area on Thursday morning.

However, the doctors there shifted Babula to SCB Medical College and Hospital (SCBMCH) at Cuttack after he was diagnosed with kidney related complications on Thursday evening.