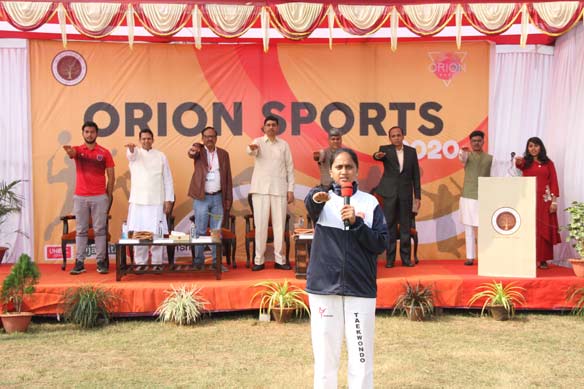 Cuttack: Orion one of the fastest-growing College Fests of Eastern India, Orion 2020 started its sixth edition with the Inauguration of sports events on the 15th of January onboard its campus. Orion has grown each year and by its 5th year, it’s already one of the top ten fests of Odisha. It is the annual cultural, sports and academic fest of Sri Sri University.

Orion started the Sports inauguration with Vedic Chanting, where the Veda students of the university chanted holy verses to mark the start of the august occasion. The Director of Student Affairs, Captain Chandra Sekhar Panda gave the welcome speech and a brief introduction about the sporting event after which the National Flag was hoisted by the Dr. Sarat Kumar Sahu and other dignitaries. This was followed by the Torch run by the talented students of Sri Sri University who have made the varsity and their respective states proud. The Torch Run started with Mr. Rajesh Pradhan who is representing Odisha at Volleyball junior nationals. After him, the torch was handed over to Ms. Annapurna Shetty who is internationally acclaimed for her Taekwondo skills, after her the torch was handed to Mr. Raheu Nirame who has been awarded as the best football player thrice by the Reliance Foundation. Finally, the torch was handed over to Mr. Alapati Kaushik who has represented Sri Sri University in different national level basketball championships.

The torch run was followed by the Oath Taking ceremony by Ms. Annapurna where all the participants and guests and students took the Olympic Oath making a promise to be respecting and abiding by the rules which govern them. Following this was the speech of Director Operations, Mr. Narendra Lamba, who is also a very good badminton player himself said that, “Sports helps build personalities and improve self-development. There is happiness in every stage of the game”

After this, the Martial Arts of the University showcased their talents where they displayed different marshal art positions. The Guest of Honor Mr. Suvam Das in his speech spoke about the importance of sports in an individual’s life. Following which, the Chief Guest, Mr. Sarat Kumar Sahu declared the opening of the Orion sports as well as shared his experience in sports and how it keeps an individual healthy.

The Vice-Chancellor of the University, Prof. Ajay Kr. Singh said that, “When children play, the right side of their brain sharpens and their creativity improves… the sportsman spirit improves which is good for their development.”

After the declaration, the vote of thanks by the Executive Registrar, Prof. B.R. Sharma ended the inaugural ceremony and gave a vote of thanks to the whole team of Orion, wishing them luck for the upcoming challenges during the three-day event. Also on this auspicious occasion, the newly established volleyball and kabaddi courts were inaugurated.

Orion sports marked as the preliminary start to Orion. Orion cultural and academic events inaugurate on the 17th of January.

The Good Samaritans of #Bhubaneswar