Bhubaneswar: Odishan Institute of Maritime and South East Asian Studies has documented several early historical urban centres of Odishan coast during the last decade. It is to be mentioned here that the prominent urban centres are Radhanagar in Jajpur district, Sisupalgarh and Talapada in Khurdha district, Jaugarh and Lathi in the Ganjam district and Urban centres like Asurgarh,
Budhigarh, Tarporegarh etc. in the Western Odisha has been documented.

These Urban centres are flourished in between 4th century B.C. to 5th- 6th century A.D. In our recent archaeological
survey (2019-20) and documentation at Durgadevi in Remuna Tahasil and Ranasahi, we found the traces of fortified early historic sites, near Balasore town. Since Balasore district is in History for its maritime activities from the early part of the Christian era to the late medieval period, no such prominent major early historic sites are documented previously in this region, prior to the discovery of Durgadevi and Ranasahi. Simultaneously, Buddhism was flourished along with
maritime activities in this region. Buddhist remains are found from Ayodhya, Jayarampur, Kupari, Sujanagarh, Soro, Bardhanpur etc. Here, for the first time OIMSEAS traced cultural
evolution of the region from 2000 B.C. to 100 B.C. representing 2000 years.

After receipt of licence in February 2021 from the Archaeological Survey of India; Govt. of India for the Archaeological Excavation project and approval of the project by Hon’ble Minister
Sri Jyotiprakash Panigrahi, Department of Odia Language Literature & Culture, the excavation was started under the guidance of Sri Bishnupada Sethi, IAS, Principal Secretary and Sri Ranjan Kumar Das, IAS, and under the supervision of Archaeologist Dr. Sunil Kumar Patnaik, Secretary, OIMSEAS from March 2021 and continued up to May 5th 2021 in the first phase.

Durgadevi is located 20 kms. from Balasore town in Remuna Tahsil bordering Mayurbhanj district. The site as such has circular mud fortification of about 4.9 kms. in circumference and in between the river Sona on south and the Burahabalang on its north-eastern margin. The village Durgadevi, named after its presiding deity of the locality. Again two small nullas Gangahara and Prassana joins the site on its north and south forming natural moat of the site which was an ancient water management system developed at least 4000 years back from present. Excavation was started with an aim to correlate the simultaneous growth and
development of Maritime activities, and Urbanisations in East Coast of India linking Ganga valley in North and Mahanadi Valley in Central Odisha, more particularly to focus upon on the
early cultural development in northern Odisha. 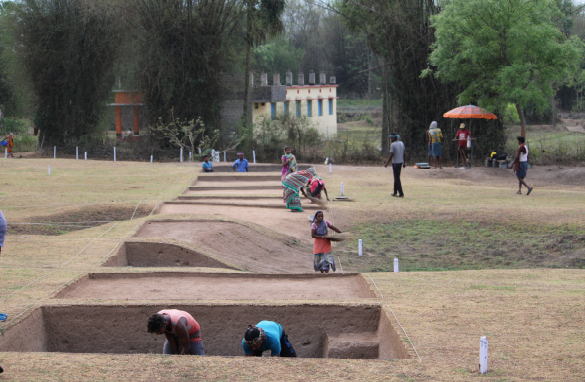 Chalcolithic Phase (2000 to 1000 B.C.)
The Major discovery of the Chalcolithic period of Durgadevi was the base of Circular Hut, Black on Red Painted pottery, Black Slipped Ware, Red Slipped Ware and Copper objects. The floor of
the Circular hut was rammed with red soil mixed with Genguti. From the base of the circular hut and utilitarian objects the life style of the people is derived and the people are mostly leading
settled life and started agriculture, domestication of animals and fishing Iron Age Period (1000 to 400 B.C.)
The cultural material evidences and remains found from this phase include pottery remains of Black Burnished ware, Black and Red Ware, Red Polished fine Black Ware with slip and
Chocolate Ware, terracotta sling balls, hopscotch along with iron objects like nails, arrow head, crucible and slag of various kinds. The life style of this phase is marked little improved and
depended on agriculture and production of various other crops and led settled life. The use of iron is a land mark phase in the growth of civilization in Odihsa particularly in North Odisha.
There are several Iron Age sites discovered by various archaeologists in upper and middle Mahanadi valley but in North Odisha this is the first site.
Early Historic Period (400 to 100 B.C.)
The cultural materials of this Early Historic phase is represented with pottery specimens of Red Ware, Red Polished Ware, Black Slipped Ware, Course Grey Ware, Fine and Super Fine Grey
Ware, Terracotta Ear Studs, Bangles, Beads, Hopscotch stopper, Gamesman, terracotta Wheels and some conical objects. The life style of the people derived from the cultural materials are
very improved from agricultural base to trade and construction of Fortification around the site with moat which signify the emergence of Urbanisation at Durgadevi around 400 to 200 BCE.
Thus in the first phase of Excavations from March to 5th may 2021 three phases of Cultural deposits has been found and march of civilizationis clearly visible. It indicates about 2000 years of glorious history of the district. This will add a new chapter in foundation of Odishan History. However, we are trying to get absolute date for the site through AUC, Inter – University Accelerator Centre, New Delhi. Further excavation will not only bring new light on the development of society and culture of Balasore district but also the East Coast of India.