The protest staged under the banner of ‘Haq Pain Hartal’ (protest for right) and was effective from 7 am to 12 noon on Monday. Protests staged at all district headquarters offices, block and municipality offices across the state.

The essential services like health, ambulance service etc. excluded from the protest while train, bus and other modes of transportation closed. 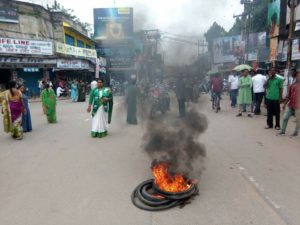 The decision has been taken following the high-rise in prices of petrol, diesel and liquefied petroleum gas, which has turned a burden on common people and poor. It is also affecting the economy of the nation. The rise in transportation has resulted in a hike in the price of essential goods. This decision of the Centre is anti-people, said BJD leaders at the press meet.