Report by Badal Tah; Rayagada:”Ama sankalp” literary meaning of which is “Our resolve”, an innovative health initiative in Rayagada district, was conceptualised and jointly inaugurated by Collector Smt Guha Punam Tapas Kumar during September 2016 and meant to reduce infant and maternal mortality rates(IMR & MMR). Bike ambulances were introduced specially in Kalyan Singpur block during the year 2017 in the context of providing health services to Dangaria Kandha tribals of cut-off areas in Niyamagiri hills. Bus services were initiated this year to school students and especially women in pregnancy who were crossing the torrential streams and rivers in dangerous conditions by local made country boats, tubes, vessels. Movable/mobile medical tents were provided to inaccessible villages. Scores of impregnated bed-nets were freely distributed among villagers as a preventive measure to combat malaria and dengue. Vaccination was conducted en-masse for Japanese Encephalitis.

All these were good steps without proper implementation and monitoring at CHC/PHC/Sub-Centre levels. Though ama sankalp yielded some good results, other initiatives ended up in fiasco. The CDMO never agreed that there was a single death due to dengue this year though more than ten persons died of the dreaded disease after being diagnosed by renowned hospitals of the neighbouring Andhra Pradesh. The ambulance bikes are dysfunctional now. The buses owned by the private parties withdrew the service citing the reason as high running & maintenance cost.

There are 817 hard to reach villages according to the statistics provided by district administration. Eighty six numbers of movable tents for same number of inaccessible villages were purchased spending Rs.11,13,356.00 out of District Mineral Fund of 2016-17. Ten tents have been provided to Kashipur which has highest number of inaccessible villages, ie, 150. Equal number of tents have been provided to Padmapur block where the number of hard to reach village is 33. The logic behind this distribution is best known to CDMO. Unfortunately these tents have till not reached any single village leading to criminal wastage of resources from DMF.

There are eleven Community Health Centres(CHCs) in the district, 38 Primary Health Centres(PHCs) & 236 Sub-centres in the district. For Rayagada, the CHC is situated in Jemadeipentho which is around ten kilmeters from the district headquarters. There are five PHCs under this CHC. Khilmisguda PHC is dysfunctional according to the local medical staff. The PHC at Kerada does not have basic amenities like a single lavatory. The bed strength in the CHC is only six whereas all the PHCs under it has not a single bed. The number of sub-centres is 33. No ANM or medical staffs stay in any sub-centre of this CHC. If this is the situation of headquarter CHC, one can imagine the situation of Kalyan Singhpur, Kashipur, Chandrapur and Gudari blocks.

Carrying the pregnant tribal women by cloth tied with bamboo sticks is still going on in Kayan Singhpur in the absence of 102/108 ambulance, which is non-responsive even after continuous phone calls by the family members of the patients. In spite of Collector’s instructions, CDMO is yet to take action in the case of Mita Sabara of Perupanga village under Padmapur block. A dibyangjan named Sri China Majhi Kadraka alias China babu of Kalyan Singhpur block is yet to get proper assistance from the district administration in spite of order from District Collector during grievance. 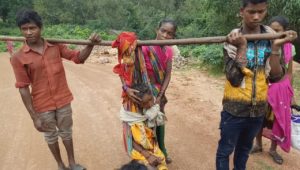 “The officers at the lower rung need to be more proactive to carry out the instructions of the Collector. They need to strictly follow-up and monitor to take corrective measures and use available resources and infrastructures on a sustainable basis. Collector can conceptualise and take lead in floating ideas; but the officers need to carry those forward in a team spirit which seems to be lacking”, said Sri Bijaya Mishra, an enterprising farmer from Munising village.