Bubabneswar: The Odisha Government would strive for GI recognition for the State’s Rasagola going through the due process. Odisha Finance Minister Sashi Bhusan Behera held the view that West Bengal has got the Geological Indication (GI) tag for “Banglar Rasogolla” and not for the Rasagola made in Odisha. Behera said that the process for this is underway.

Behera’s reaction followed a deep sense of resentment among the people of the State as well as among the traders in the wake of reports that West Bengal has succeeded in cornering the enviable GI status for the famous sweetmeat Rasagola.

West Bengal has won the claim over the origin of the sweetmeat Rasagola as the neighbouring State has been awarded the Geographical Indication (GI) tag.
The West Bengal Government had sought the GI tag for what they called “Banglar Rasogolla” (Bengal’s Rasagola) in its application before the Intellectual Property office in 2015.

While Odisha staked its claim over the mouthwatering desert, the West Bengal Government claimed that Rasagola was invented by Nabin Chandra Das of that State in 1868.

Earlier, the Odisha Government had asked its Science and Technology Department to apply for patent as well as GI tag for the State’s Rasagola. A committee set up by the department conducted research on the origin of Rasagola and finally concluded that the sweet had its origin in Odisha. The research cited that Rasagola existed in Odisha since 15th-16th century as it has been mentioned in the ‘Dandi Ramayana’. But despite historical proof and evidence about origin of Rasagola, the State Government did not proceed further to get its claim recognised. 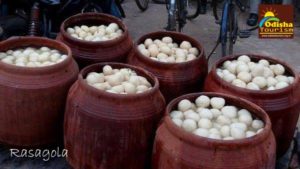 Jagannath cult scholar Asit Mohanty had already submitted a 100-page report claiming that Rasagola originated in Odisha. In the report to the State Government, he contended that the sweet’s reference was found in ‘Dandi Ramayana’, a version of the epic adapted by Balaram Das in the 16th century. The report claimed that Rasagola is being offered to gods in mutts and temples for over 600 years.

Heavy rainfall likely in Odisha during next 24 hrs