Bhubaneswar:  After winning two back-to-back games at the Kalinga Stadium, Odisha FC will now meet Mumbai City FC in their next game in Bhubaneswar on 11th January. OFC had registered their first win of the season against the same opponents when they last met in Mumbai on 31st October.

Club’s India International Vinit Rai, who scored his first goal of the ISL in the previous game, is all charged up for the battle against Mumbai City FC on Saturday. 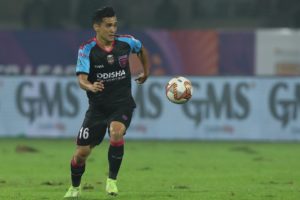 Speaking after the last match, Vinit said, “First of all, I want to thank the people of Odisha who came in big numbers to back us at the stadium. It was the second successive win in Bhubaneswar. We want to come stronger and as a better team against Mumbai City FC on the 11th of January. I just want to keep working hard and help the team to be in the playoffs this season.”

Ahead of Odisha’s next game, Daniel Lalhlimpuia expressed, “We are so happy to see a lot of crowd against Chennaiyin and are also delighted that we were able to gift the win to them. We are expecting the fans to come in big numbers in the next match against Mumbai City FC. We have four more games remaining here in Bhubaneswar in this season and we want to see the crowd that we saw yesterday in all these matches.”